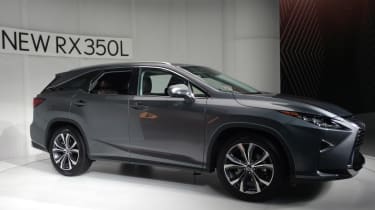 The Lexus RX L is the long-wheelbase, seven-seat variant of the Japanese marque’s range-topping RX SUV. It’s available in three trim levels (all with a V6 petrol hybrid powertrain) and starts at just under £51,000 – a £2,350 premium over an entry level five-seater RX.

It was first revealed at the 2017 LA Motor Show and serves as a rival to the likes of the Audi Q7 and Volvo XC90, with those two starting at £51,425 and £50,435 respectively. Lexus claims that passengers who sit in the RX L’s third row of seats will not have to compromise on comfort as they do in some rival 7-seat SUVs. This, says Lexus, is because the length of the RX L has been extended by 110mm and features the likes of triple-zone climate control on the spec sheet. 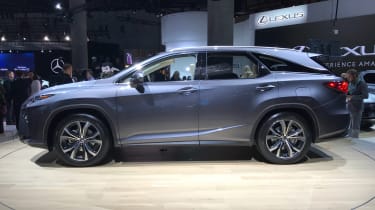 The order books are open for the Lexus RX L, with prices starting at £50,995 for the SE spec, while opting for the Luxury model increases the price by £3,100. Going for the range-topping Premier trim will set you back £61,995.

The RX L uses a petrol V6 hybrid powertrain with two AC electric motors (one powering the front wheels and the other the rear) which puts its power down via an ‘E-Four’ part-time all-wheel drive system. The RX L can drive on electricity alone, but only for up to one kilometre (changing dependent on driving conditions).

In total the system produces 308bhp, with power fed through Lexus’ E-CVT transmission. These performance specs result in a claimed 0-62mph time of 8.0 seconds and a top speed of 112mph – all in a car with a kerb weight of around 2,200kg. 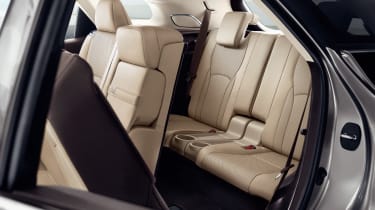 Lexus currently offers the following trim levels on the RX L: SE, Luxury and Premier, with Sport and F Sport models as yet unconfirmed. As standard all models come with a raft of safety gear, including: Adaptive Cruise Control, automatic high beam lights and Lane Keep Assist.

Moving up from SE to Luxury brings creature comforts such as a wireless phone charger, power assisted tailgate, and auto dimming and folding wing mirrors. But going all the way up to Premier brings adaptive suspension, 15-speaker Mark Levinson surround sound and memory function driver’s seat.

Thanks to the 110mm of extra length, the RX L comes with 966-litres of boot space with the rear seats folded down and 495-litres with the seats up.

Would you choose the Lexus RX L over the Audi Q7 or Volvo XC90? Let us know in the comments below...