The Lexus RX hybrid SUV gets seven seats in RX L form, but is it enough to put it on terms with the class best? 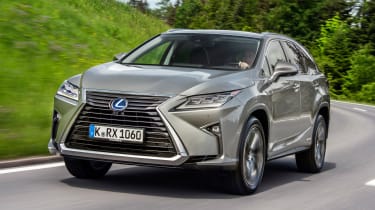 THE Lexus RX L fills a niche within a niche, so if you’re after a hybrid seven-seater but don’t have access to a plug socket, it’s worth considering. It’s comfortable and refined, but most of its rivals are more involving to drive. The biggest problem for many could be that despite the extra row of seats, the RX L is far from the last word in practicality.

Lexus says that since launch in 1998, the RX has sold more than 2.7 million units worldwide across its four generations. Like many premium carmakers, it has it’s luxury SUV to thank for providing the sales to bankroll the cars enthusiasts crave, such as the iconic LF-A and the new LC coupe.

With demand for posh SUVs higher than it’s ever been, it’s no surprise to see that Lexus thinks it can wring a little extra cash out of its flagship offering. Enter the RX L – a slightly lengthier and more expensive version of the BMW X5, Volvo XC90 and Audi Q7 rival.

The headline is the addition of a third row of seats, squeezed into a car just 110mm longer than the standard RX. The redesign is a subtle one, with the only real design change made at the rear end of the car. The wheelbase remains the same as on the standard RX so all the extra length is found in the bodywork at the back.  There’s a slightly longer overhang and a more upright rear windscreen, creating a taller roof for the new occupants in the third row. 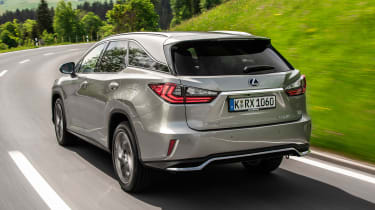 Back there, Lexus says that children should be pretty comfortable on long journeys, but for two adults it’s a squeeze, and it’ll feel claustrophobic even on shorter trips. It’s not a true seven-seat experience then, with a rearmost seats being more a +2 setup than a proper row. To make foot-room for the sixth and seventh passengers, Lexus has slightly raised the middle bench. To make any adequate legroom, however, you’ll have to slide the middle seats forward and eat into the space available to those sat there.

Room in the very back of an Audi Q7 is probably a smidgen more generous, but those in the back of the Lexus do get their own air conditioning controls, thanks to the RX L’s new tri-zone climate control. Getting back there isn’t too difficult either – the opening is a bit narrow, but folding the second row seat backs down and sliding the bench forward is done with just one lever. Similarly, the two seats in the boot fold flat at the touch of a button.

With the slightly longer rear end, practicality steps up. Boot space grows from 453 litres to 495 litres when just five seats are in place. It’s not enough to overcome the load space compromise created by the car’s hybrid powertrain though – an Audi Q7 is still streets ahead with 770 litres in five-seat mode, while a Volvo XC90 boasts 451 litres with all seven of its seats in place.

It’s a matter of taste as to whether you’ll prefer the RX L’s old school approach to luxury in the cabin. Analogue dials feature and an analogue clock sits in pride of place on the centre console. While material quality and infotainment doesn’t feel on par with Audi’s latest interiors and lacks the cool modernity of Volvo’s latest style, it certainly still feels upmarket. 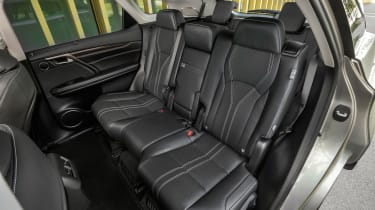 Despite over 300bhp under the bonnet, the RX L won’t set the pulses racing from behind the wheel. The drive selector features a Sport mode but there’s very little sporty about the way the RX L drives, reflected in its sluggish performance figures. Instead, this is a car you’ll get the best out of when it’s driven smoothly. Ride quality is good at all speeds when the adaptive dampers are primed in their most docile setting, while the smooth hybrid assistance and level of refinement makes the RX L a pretty relaxing car to drive, provided you don’t allow the CVT transmission to hold higher revs for too long.

The extra weight of the third row of seats and additional bodywork means claimed fuel economy takes a knock, dipping down to 47.1mpg on 20-inch wheels from the five-seat RX 450h’s 51.4mpg figure on wheels the same size. It’s still an impressive feat for a six-cylinder petrol SUV weighing 2.2 tonnes, but a diesel XC90 D5 is slightly more economical and faster, so the only real benefit is a minor first year saving on vehicle excise duty and quiet, pure electric running at low speeds.