Bucket lists are something we often find ourselves dreaming up on a rainy day or on our commute to work.

These experiences could be as wild as your imagination allows. Some people might want to go bungee jumping and skydiving; others may be more eager to trek along the Great Wall of China or climb Mount Kilimanjaro.

We gave two of our readers, a young couple called Liza and Daniel, the chance to tick a few ideas off their bucket list with the help of the SEAT Arona – the company’s new crossover that sits just below the Ateca SUV.

We suggested a few experiences for the couple to try, but Liza and Daniel had their own bucket list in mind – so we tagged along to see how they got on, and whether they enjoyed their time in the Arona.

The first stop on our journey was in Brighton, as the two were keen to experience some of the fantastic street art that can be found down the town’s many alleyways. Heading up the tour was former street artist Req, who’d be Liza and Daniel’s guru for the morning. 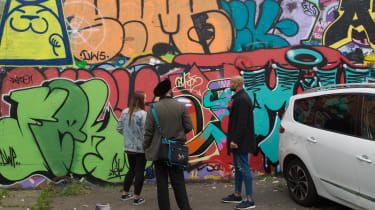 Around each corner were buildings covered in artwork, with one particular mural featuring a host of famous musicians who have died. The artists included rock musician Jimi Hendrix, rock star David Bowie and rapper Tupac.

We also stumbled across one of the most famous pieces of graffiti art: Banksy’s kissing policemen. Sadly, this particular version was a copy because the original was sold to a private collector in the US in 2014, but it was still kept behind protective glass to prevent other artists from leaving their tag (a sort of signature) on it.

The Arona looked right at home among the vibrant designs covering the buildings around us. “You can see they’ve really thought about the styling of this car,” Daniel told us.

This, however, led to a debate about which colour combination suits the car better. Liza said she is “quite minimalistic” and would “just keep it one colour”. Daniel, on the other hand, said he would choose the Arona’s bi-colour roof option. “I think the colour roof suits its style,” he told us, “especially with the white and grey combination we’ve got on this one.”

With the couple agreeing to disagree, it was time for them to try their hand at street art, so we navigated the busy streets of Brighton to head to Req’s studio. Parking in the tight urban spaces near the studio could have been a real challenge, but Daniel told us that the reversing camera in the Arona was “really helpful” and turned a potentially frustrating chore into a simple task.

To kick off the art class, Req had our two readers using spray cans to paint small dots on a blank canvas, teaching them how to avoid applying too much paint. The key was to use the right amount of pressure on the valve and keep the can at the same distance from the canvas at all times. 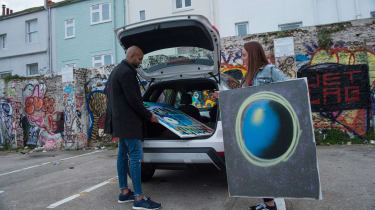 When our readers had mastered the art of spraying dots, they moved onto painting lines and circles. Liza’s painting took the form of a street-inspired scene with “Brighton” written at the top, while Daniel’s resembled a scene from a sci-fi movie. Both wanted to keep hold of their works of art, so we dropped the 60/40-split rear seats and loaded the large canvases into the boot.

After a quick lunch break at the Squirrel Sandwich coffee shop in Trafalgar Street, we loaded up the Arona with their street-inspired artwork and headed east to the Knockhatch Adventure Park, where Liza and Daniel wanted to end their day with a more adrenaline-pumping experience: quad biking.

The two were looking forward to taking lots of photos to remember their crazy day. Unfortunately, Liza’s phone ran out of battery on the journey – we’ve all been there – but that wasn’t a problem because the Arona comes with wireless charging. All Liza had to do was drop her smartphone into the cubbyhole in the centre console to top up the battery. Problem solved.

We meandered through the twisty and undulating country roads. Once we arrived at Knockhatch, however, the smooth tarmac lanes quickly changed to claggy mud, yet the Arona soldiered on through to the entrance of the quad-biking facility. 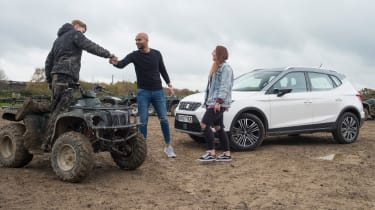 This must have prepared Liza and Daniel well for the challenging conditions ahead, because both of them took to the mud-laden quad-bike track like ducks to water. Within minutes, they were sliding the bikes around and flicking chunks of dirt into the air. Jumps and backflips, sadly, weren’t on the agenda for the day.

It seemed like a perfect way to end their journey. We’d taken the Arona through the bustling streets of Brighton, out through winding roads of the countryside and onto boggy dirt tracks without a fuss – but what did our two readers think of their day in the Arona?

“I do think it’s ideal for a couple like us,” Liza said, and pointed out that the crossover’s “spacious” interior made it very versatile.

Daniel agreed, and told us that it “feels really nippy around town and it’s easy to manoeuvre around tight car parking spaces”, despite being “slightly higher up” than his current car.

“The panels don't restrict your vision by creating blind spots," said Lisa. "And I love it when a car gets close to you and the wing mirrors start to flash - that's really cool. 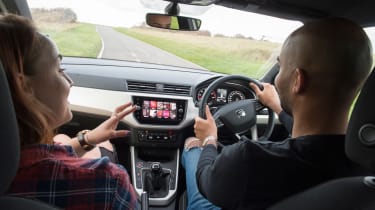 The look and feel of the Arona’s eight-inch touchscreen infotainment system with Apple CarPlay and Android Auto was also a hit with our readers. Liza was a particular fan of icons on the display, which made switching between the sat-nav screen and music player a breeze.

Meanwhile, Daniel told us that he found the crossover was the perfect size for running around towns with busy streets. “It doesn’t feel massive,” he added. “I’ve got good visibility and that gives you confidence when you’re driving it. And it’s fun, that’s the important thing,” he said.

This marked the end of our readers’ extraordinary day in the new crossover, but they got to complete some once-in-a-lifetime experiences.

Discover more about the SEAT Arona at seat.co.uk/arona.