Snow and sub-zero temperatures this winter haven’t been as bad for drivers as forecast, argues Mike Rutherford 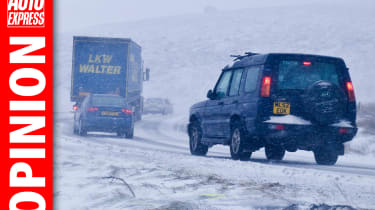 Are the weather men and women at the BBC on something? For weeks they’ve been banging on about sub-zero temperatures, snow and treacherous road conditions that I simply haven’t seen or felt.

I’ve been out there judging dozens of World Car of the Year contenders on thousands of miles of UK roads. Yet despite my usual 7am starts and occasional late-night finishes, I haven’t once had to scrape ice off my windscreens. My tyres haven’t driven over a mile of snow. My in-car instrument panels haven’t displayed below-zero temperatures. Put another way, it’s not been a bad winter for this well-travelled pedestrian, cyclist and driver between December and February. And the same goes for tens of millions of others.

So why the constant, near-hysterical warnings from the BBC’s weather ‘experts’/comedians who repeatedly and incorrectly tell the nation our cars, bikes and walking shoes are to be snowed upon and/or subjected to accident-inducing, life-threatening sub-zero temperatures? In the main, it’s nonsense.

At best, the BBC’s weather boys and girls have morphed into light entertainers who, er, aren’t entertaining. At worst we’re being subjected to fake weather news.

Last week I heard a Radio 5 Live presenter tell the UK that it was cold outside (it’s winter, mate!) and that the inside of his car was clad in ice which fell on him as he tried to drive. Really? I’ve driven in Iceland, Greenland, northern Sweden, Alaska, North East Asia, Russia, Canada’s Northern Territories and countless one-elk towns inside the Arctic Circle – and never experienced interior ice. Yet we’re meant to believe the bloke from the Beeb suffered it in mild Manchester.

The state broadcaster has a horrible, counter-productive habit of telling the 45 million drivers of Britain that “we” are in for icy, snowy, sub-zero temperatures and treacherous road conditions when the overwhelming majority of us are not. Unless you’re travelling up, down or across the UK, national weather forecasts and reports are a waste of time and money. A driver in, say, Brighton cares about the snow (allegedly) in the Scottish Highlands as much as a Highlander cares about strong winds on the south coast of England.

It’s time for the Beeb and others to drop their costly, time-consuming, often scaremongering, largely irrelevant national weather broadcasts and focus on more accurate, less sensational, comedy-free local bulletins instead. Am I the only one who suspects that our generally anti-car state broadcaster and the motorist-loathing Government that funds it are trying to frighten people off this winter’s treacherous, snow-covered, sub-zero roads that are anything but?

Read our top tips for driving in the winter…