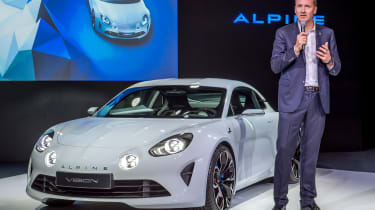 Jaguar Land Rover Special Operations - the division behind SVR performance models and the ‘continuation’ models sold by the Classic brand - is to be managed by the current boss of Alpine, it has been announced.

Michael van der Sande, who also has experience at Aston Martin and Tesla, as well as Renault’s reborn sports car brand, will take over from John Edwards, who has decided to leave Jaguar Land Rover after 27 years with the business.

• What is the JLR Special Vehicle Operations division?

Edwards, who has seen Special Operations grow under his guidance since the division was created in 2015, said: “I’m confident the new recruits will bring fresh thinking and new direction, building on what we have achieved.” It has not been announced if he plans to step away from the automotive industry altogether, or if he’s moving elsewhere.

Jaguar Land Rover chief Dr Ralf Speth paid tribute to Edwards, saying he would be “sorely missed”, adding: “John has been instrumental in the formation and success of Jaguar Land Rover Classic and has led the team behind our world-beating SVR and SVAutobiography models - cars that our most discerning customers love. We wish him all the very best for the future.”

Special Operations’ most recent launch was at the recent Geneva Motor Show, where the firm showed the three-door Range Rover SV Coupe.