What is the Jaguar Land Rover Special Vehicle Operations division? 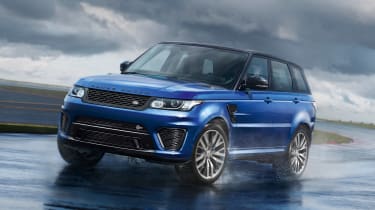 Jaguar Land Rover's SVO (Special Vehicle Operations) brand has big ambitions - and if it is to be as succesful as Mercedes' AMG then it has a long road ahead of it. JLR is planning to push ahead with SVO though, with plenty of new models in the pipeline.

“We want to build the SV brand at the top of JLR”, he said. “We’ve seen great success with the Range Rover Sport SVR, and you’ll see our next [SVR] model early next year.

“Over time, we expect to use SVR further and further down the JLR range – and that doesn’t necessarily mean four-wheel drive.”

Eventually there will be three different SV ranges of Jaguar and Land Rover cars, each with something different following the SV moniker to indicate whether it is a sporting car, an all-terrain car or an out-and-out luxury car.

The SVR models will be the sporting ones, with the R standing for race. To qualify for an SVR badge, a new Jaguar or Land Rover will need to be lighter, more aerodynamically efficient and more powerful than any other model in its range. So far we've only seen a Range Rover Sport SVR, but its success could result in a Jaguar model appearing soon. 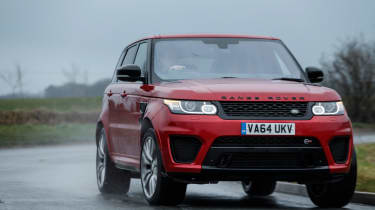 The all-terrain models will be badged SVX, and these will all be four wheel-drive, more luxuriant inside and more capable off road than any other models in their respective ranges.

While the next-generation Land Rover Defender hasn't been finalised yet, it is this car that JLR's SVO division will focus heavily on in the next few years.

Newsome told Auto Express: "The next Defender will give SVO huge opportunities". He also insisted that the new car will be significantly improved on road, while "moving the game on off-road."

Then there's the third SV badge, worn by JLR’s out-and-out luxury cars. The SV-Autobiography name – first seen on the Range Rover SV-Autobiography – is the pinnacle of JLR opulence, and will only adorn the brand's most upmarket and carefully considered cars.

SVO will put time into special projects like the F-Type Project 7, though these won't be one-off bespoke customer requests.

Newsome told us: “I don't see SVO making products in the 10s – mainly from 100s to single figure thousands. The projects we do in addition to SVR are where we get to play. Project 7 was an emotional statement about the history of Jaguar, but it taught us an awful lot about the performance of F-Type.

“If we did an F-Type SVR, it would be a very different product.”

Do you think Jaguar and Land Rover's Special Vehicle Operations division can rival Mercedes-AMG? Let us know in the comments section below...