Over 5,500 people were caught drink driving in December 2017 – more than in any other month of the year 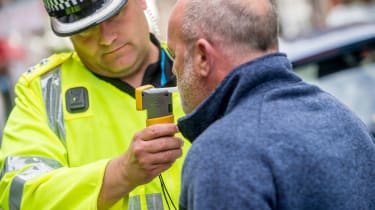 An average of 179 drunk drivers were caught every day in December 2017, according to new data.

There were 5,551 drink driving offences over the festive period last year. Not only was this more than any other month in 2017, but it was 338 more than the next closest month – July – which saw 5,213 drunk drivers caught.

The data – which Confused.com obtained from 41 of the UK’s police forces via Freedom of Information requests – also showed men are five times more likely to drink and drive than women, with 34,886 males caught drunk behind the wheel in 2017 compared with 7,061 females.

The insurance comparison site also revealed four per cent of UK drivers have been caught driving over the limit, of which 28 per cent of cases actually occurred the morning after drinking. Some 15 per cent of drink drivers admit being caught between the hours of 5am and 11am.

Of those motorists caught drink driving between 5am and 11am, 12 per cent said they drove their cars still feeling drunk the morning after attending a work Christmas party.

Amanda Stretton, motoring editor at Confused.com, commented: “There are a worrying number of people confused about how long they should wait between drinking alcohol and driving, and this has led to thousands of motorists being caught drunk behind the wheel each month.”

She warned of the dangers of drink driving, reminding motorists that it can not only “seriously impact the safety of our roads and put other road users at risk”, but also “land drivers with a fine or driving ban”.

Stretton also suggested drivers use Confused.com’s “morning-after calculator that gives an idea as to how much alcohol is still in your system, and how long it typically takes to leave your body to give a quick indication of when you might be safe to drive”.

Meanwhile, analysis of police and Home Office figures by AlcoSense Breathalysers showed drivers are three times more likely to be breathalysed in December than in any other month, with 63,648 roadside breath tests carried out in December 2017 – equating to 20 per cent of the annual total.

Dyfed-Powys Police carried out 5,342 breath tests on drivers last December, of which 121 – or 2.3 per cent – were failures. However, the Metropolitan Police saw more positive breath tests than any other force that month, with 515 drivers caught over the limit.

Confused by the drink-drive limit? Click here for our guide to the different UK laws...