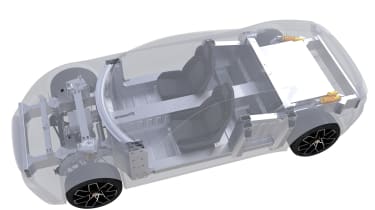 Piech, the all-electric Swiss start-up brand behind the Mark Zero concept, has released some design sketches and performance specs for its forthcoming four-seat GT, called the GT-4, as well as its five-seat GT-X SUV. Both models will use the same running gear as the Mark Zero, along with a stretched version of that car’s platform.

As with the Mark Zero, the GT-4 and GT-X are driven by three electric motors; one for the front axle and two for the rear. Piech claims the system’s combined power output will be “about 450kW”, or roughly 603bhp, giving the GT-4 and GT-X respective 0-62mph times of 3.8 seconds and 4.7 seconds.

Both models will be powered by Piech’s new 70kWh lithium-ion battery pack, which has been developed in tandem with the Chinese electronics manufacturer, Desten. Thanks to its unique structure, Piech claims this can be charged from empty to 80 per cent capacity in a “record” four minutes and 40 seconds when plugged into the firm’s upcoming fast charger. 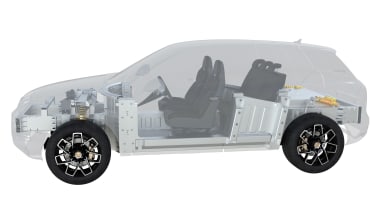 Unlike in most electric vehicles, Piech will mount the battery packs over the front and rear axles in the GT-4 and GT-X, rather than under the cabin floor. The Swiss firm claims this development provides a driving experience closer to that of a combustion-engined vehicle, while also providing a sportier, lower driving position.

Over the next three years, Piech’s Mark Zero concept will evolve into a production sports car, called the GT-2. It will be closely followed into showrooms by the GT-4 and GT-X, with the company planning to offer its customers a range of drivetrains.

Co-CEO Toni Piech outlined Piech Automotive’s plans, stating: “The first will be electric vehicles, but if hydrogen drive or fuel cell technologies reach their breakthrough, our modular vehicle architecture will allow us to respond flexibly to the developments. And who knows, maybe there will even be an increased demand for hybrids in the future. This technology is also possible in our platform.”

The Swiss EV manufacturer has yet to announce official ranges for the GT-4 and GT-X. However, given that the GT and SUV have higher kerbweights than the two-seater – at 2,000kg and 2,100kg respectively, in comparison with 1,800kg for the Mark Zero – they are likely to fall short of that car’s claimed range of 500km (310 miles).

What are your thoughts on Piech’s planned model line-up? Let us know in the comments section below…