Auto Express’s sister title has announced its best cars of 2020, with a strong showing from Renault, BMW and Skoda 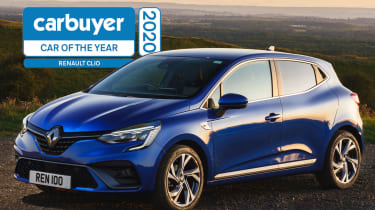 Carbuyer has announced the winners of its 2020 Best Car Awards, with the fifth-generation Renault Clio scooping the overall Carbuyer Car of the Year award.

The Clio was chosen from among a competitive pool of nominees from the past year, but took the overall victory thanks to its ability to score consistently high ratings across the board; be that thanks to the way it drives, its low running costs and purchase price, safety and equipment levels, or its interior design and quality.

Each of the year’s winners were selected based on a rigorous assessment of a car’s capabilities: with running and ownership costs, driver appeal, comfort, practicality and safety all considered highly.

There were various winners across the 22 categories. Beyond the overall prize, the Renault Clio was also crowned the Best Small Car. Skoda was the most successful brand, with five category wins. Ford took away two prizes for the Hot Hatch and Pickup categories, while BMW grabbed three awards for the 1 Series, 3 Series and 5 Series.

Click here to see the full rundown of Carbuyer’s winners (and why they won)...