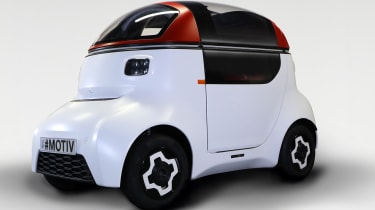 Gordon Murray Design, Delta Motorsport and itMoves have joined forces and will unveil the MOTIV autonomous platform on 11 February at the MOVE mobility conference in London. The urban mobility solution can be adapted for use as either a single-seat passenger vehicle or a last-mile delivery vehicle – and, if it complies with current legislation, it could be on sale within the next two to five years.

MOTIV measures just 2,537mm long, 1,310mm wide and 1,628mm tall – making it around 100mm shorter and 300mm narrower than a Smart ForTwo. It has been designed to comply with European passenger vehicle crash safety regulations – and Gordon Murray Design says it will offer alternative interior configurations for multiple passengers and for wheelchair users.

As it’s an autonomous vehicle, MOTIV’s interior is unlike that of a conventional car. There are no direct controls between the occupant and the chassis – instead, there’s a huge 24-inch touchscreen system which handles the car’s navigation and infotainment functions, and a shelf on which the passenger can rest a laptop.

The MOTIV platform can be further adapted for use as an autonomous light commercial vehicle. In this application, the interior is removed and the car’s storage space swells to a maximum capacity of 1,100 litres.

MOTIV is built around a lightweight aluminium chassis, which complies to the same set of European L7e quadricycle regulations as the Renault Twizy. The MOTIV weighs 450kg without the battery pack on board and features conventional MacPherson suspension, front disc brakes, rear regenerative brakes, drive-by-wire steering and 13-inch wheels.

It’s powered by a single, rear-mounted electric motor and a liquid-cooled 17.3kWh battery pack fitted under the car’s floor. The system develops around 27bhp, which gives the autonomous pod a top speed of 40mph and a maximum claimed range of 62 miles – or five hours of continuous running.

When plugged into a commercially available fast-charger, MOTIV will recover a 20 to 80 per cent charge in around 40 minutes. The platform can also be programmed to work with any form of autonomous technology – a first for the market – and Gordon Murray Design will test a range of systems ahead of MOTIV going on sale to the public.

What do you make of Gordon Murray Design’s autonomous vehicle project? Let us know in the comments section below...