Car of the future - exterior

In the next 10 years or so, cars will feature safety, comfort and efficiency technology that seems far-fetched today. 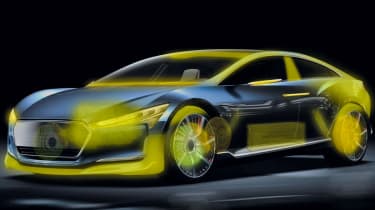 EV chargingElectric vehicles will be more popular, but we won’t be plugging them in to charge the battery. Charging will be wireless; you simply park over a flat pad laid on the road surface and magnetic induction does the rest. They will be installed in taxi ranks, so waiting cabs are powering up.

BodyshellFewer cars will be made from standard steel. Copying the aerospace industry, there will be greater use of lightweight alloys and fibre-reinforced plastics. Because of powertrain advances – fuel cell cars don’t need an engine bay – exterior design will get more ambitious.

EmissionsExhaust emissions have come a long way in the past decade, and that improvement will continue. More compact components weigh less, so smaller-capacity lightweight engines can be used, saving extra kilogrammes. Turbocharged three-cylinder petrol engines will be very popular on small cars.

BatteriesWhether you drive a hybrid or an EV, batteries in cars will be a fact of motoring life. Improved chemistry from technologies such as lithium-sulphur means less weight, longer life and faster charging, achieving 0-100 per cent capacity in less than half an hour.

B-pillarsFor years concept cars have done away with the B-pillar, as it improves occupant access. But perimeter strength was always the concern. Now Ford has done it on the B-MAX – and the floodgates will open.

Aerodynamic doorsIn a bid to produce the most aerodynamic bodyshell, designers will remove door mirrors and replace them with tiny external cameras. Door handles also cause drag, and these will become extinct, too, with fingerprint recognition, motion sensors and buttons on the keyfob taking their place.

SensorsAn array of sensor types in the car’s nose will scan road ahead, with a full-override anti-collision system that will take control of engine, brakes and steering to avoid a crash. This will integrate detection of pedestrians and large animals such as horses.

EnginePetrol and diesel will still be the dominant fuel options. Many small cars will have three-cylinder petrol turbos, with makers continuing to promote their own patented solutions to get the lowest fuel consumption and emissions.

HeadlightsFull LED lights will be commonplace, with auto-dipping and a dynamic beam pattern that constantly adjusts its length and width to the traffic ahead. More advanced cars will feature laser headlights, which use half the energy of LEDs.

AirbagsRunning the length of the front bumper will be sensors that trigger pedestrian airbags. These inflate in a split-second, and are set to dramatically cut deaths and injuries. Most new cars will come with them by 2022.

BrakesCarbon composite brake discs are today restricted to motorsport and high-end performance cars. But their hugely improved stopping power can cut accident rates. Manufacturing advances will make them cheap enough to fit on every new car.

TyresToday, 20 per cent of fuel use can be down to poor tyre choice. Drivers are burning too much just to get the car moving. Low-rolling-resistance tyres are available now, but new rubber compounds and tread designs will make them far more advanced.

Chassis layoutHydrogen cars will be a niche product, popular with firms keen to be seen to be green. The fuel cell and H-tank will be sandwiched in the chassis so they don’t impact on the cabin. Some cars will plug in at home, generating electricity for the national grid.

SuspensionThe days of poor ride quality will be well and truly over. Even entry-level small cars will have a basic adaptive-suspension system, with cheap electronic actuators making sure the going remains smooth no matter what the road surface is like.

In-wheel motorsThey’ve already been seen on numerous concept cars, but in-wheel electric motors will play a much greater role in the future of motoring. They could work in conjunction with micro gas turbines which generate the electricity to drive them.