We celebrate the best Lancia cars ever, as the firm becomes Italian market only 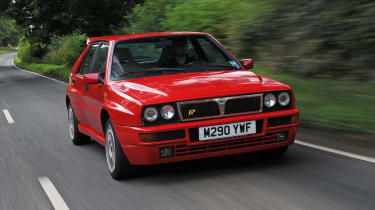 Speaking in 2012, Marchionne had previously said, "We have to be honest. Lancia will never be what it once was. The only model that is of any value in Europe is the Ypsilon, which will be saved. The rest of the range has no appeal." Once the Ypsilon reaches the end of its life-cycle it is not clear if Lancia will continue in any form.

We've put together a gallery (see above) to celebrate the greatest cars Lancia ever built, including the Lancia Delta Integrale, which was recognised by Auto Express' readers as being the second best car to emerge in the last 25 years – finishing ahead of the McLaren F1 but behind the Ford Focus mk 1.

Lancia was founded back in 1906 and by 1969 it had become part of the Fiat group after losing significant sums of money. Soon after the take over the infamous Lancia Stratos was born. Weighing in at under 1,000kg and powered by a 2.6-litre V6 mid-mounted Ferrari engine, the Stratos won three consecutive World Rally Championship in 1974, 1975 and 1976.

Despite Lancia’s imminent withdrawal from major markets, Marchionne remained positive about other Italian manufacturer Alfa Romeo – also managed under the Fiat umbrella. "There are teams of our men in secret hangars all around Italy that are preparing Alfa Romeo‘s new models, which we will present in April and which will change the image of the brand, taking it back to absolute excellence," he indicated.