This is the Alfa Romeo Giulia most people will actually buy 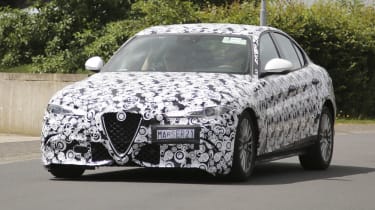 The dust is still settling after the reveal of the new Alfa Romeo Giulia, but this is the first time we've seen one without the racy Quadrifoglio Verde (QV) styling upgrades. The more mainstream Italian saloon will get a range of four cylinder petrol and diesel engines for its mid-2016 launch.

The styling of these regular models is crucial, as they're the ones we're far more likely to buy compared to the 503bhp Quadrifoglio that was revealed first. The biggest differences are obvious despite the disguise; the chunky 'teledial' alloys, bulging bonnet and beefy side skirts are gone, although the front grille and bumper hasn't shrunk much despite losing the splitter. 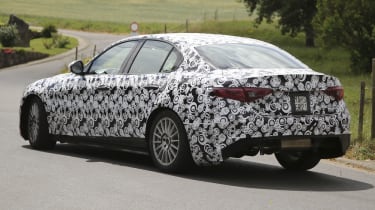 At the rear, the quad exhaust pipes have been ditched in favour of a subtler set of two, while the boot spoiler has been removed. We expect this to be reflective of the base model Giulia, while bigger wheels and bodykits will be available on sportier trims.

Under the bonnet of this prototype will likely be a four cylinder turbocharged petrol or diesel unit, possibly a development of the engines found in the Giulietta hatchback. We do know for certain the Giulia will be available with either rear or four-wheel drive, bucking the trend set by the front-drive 156 and 159. A six-speed manual will be standard, with a dual-clutch autobox optional.

Although the Giulia Quadrifoglio Verde revealed earlier this year is said to be pretty much production ready, the lesser variants aren't expected to be seen until the Geneva Motor Show in March next year when we'll be given the full lowdown on the range, specs and prices.

Now read our list of the best executive cars to buy.