“The franchised new car garage as we know it is wrong” 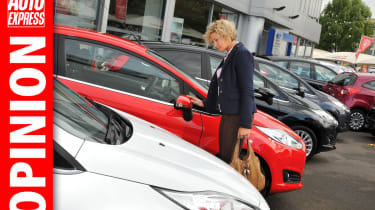 In the past, consumers seeking, say, audio or video gear would have to go to Rumbelows or Comet. Now they’ve got Apple Stores or Richer Sounds. Like Blockbuster, Borders, Focus, MFI, Threshers and others, Rumbelows and Comet were murdered on the High Street. Every dog has its day – and they’ve had theirs. Traditional/tired franchised dealers selling new cars, take note.

Too many languish in inappropriate properties peddling factory-fresh vehicles in the same way they’ve always peddled them – via the hated haggling process. Customers go up against seasoned salesmen (women are rare) on their territory, ‘negotiating’ on their terms. Then the cars take months to arrive! It’s all wrong.

The customer experience is wrong. The business model is wrong. The traditional, tired, franchised new car garage as we know it is – in 2015 – wrong. Many franchised dealers have been exempt from the retailing revolution.

It’s for these reasons that I am, for the first time, urging consumers who’ve decided what model, spec and colour they want NOT to go direct to a franchised dealer for the haggling/buying ritual.

Initially, at least, bypass them. Use the phone and Internet to shop via established third-party companies – agents, brokers, enablers, facilitators, intermediaries and the like. The top ones closely monitor UK retailers, offering the best prices, customer service and delivery dates.

You don’t have to meet or visit that retailer (who, incidentally, will probably be a franchised dealership) as it’ll probably be many miles away. Pay electronically. Have the car delivered, on a trailer, to your home.

And if they don’t change, many could – perhaps, should – go the same way as Rumbelows and Comet.

Do you think the way in which we buy new cars needs a shake-up? Have your say in the comments...