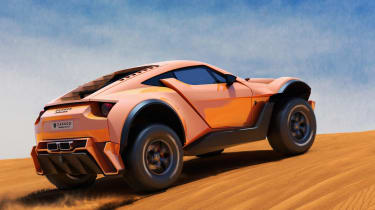 The Zarooq Motors SandRacer 500GT - an attempt by the UAE-based manufacturer to combine a sporty coupe and a tough sand-blasting off-roader - is now in production, almost two years on from its initial reveal after the 2015 Abu Dhabi Grand Prix.

In that time Zarooq has fine tuned the design, while a new engine replaces the V6 unit previously touted. 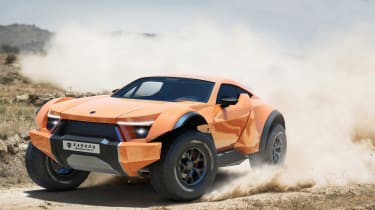 It's a mid-engined, rear-wheel drive car with a 6.2-litre V8 producing 518bhp and 660Nm of torque. Power is delivered to the rear wheels via a five-speed sequential gearbox. The radical bodywork is made of carbon fibre, so it weights just 1,200kg.

That means performance will be strong on the road, but that's not all - the clue is in the name. The SandRacer is also built for the desert, so it features off-road focused suspension with two ride height settings, big knobbly tyres and racing harnesses, alongside a full built-in roll cage. 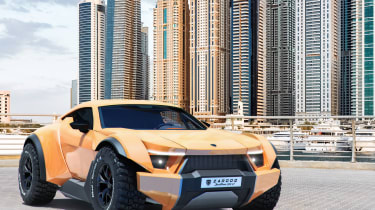 It's not a completely stripped-out racer, though, as it's also meant for road use. Inside you'll find an LCD sceen, speaker system, air-conditioning and even a cupholder, while the hand-stitched leather interior is made by Mansory.

Zarooq plans to build and sell 35 units of its limited-edition supercar-cum-dune buggy, with first customers now in line. Prices start at $450,000, equating to about £350,000.

Would Dubai a Sand Racer off-road coupe? Let us know in the comments section below...