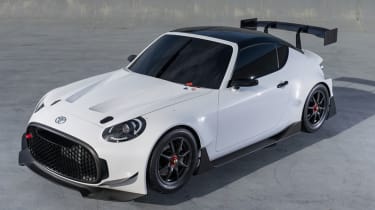 One of our highlights of the 2015 Tokyo Auto Show was the Toyota S-FR. It's a tiny 2+2 rear-wheel-drive sports coupé that will take on the Mazda MX-5 when it goes on sale in early 2017. Now though, just to whet our appetites even more Toyota have released images of a racing concept, which will debut fully at the Tokyo Auto Salon.

No specs of the concept have been revealed, which suggest it's simply a styling exercise rather than a glance at a possible production model. It still looks great, though, with a purposeful-looking bodykit comprising widened wheel arches, a carbon-fibre splitter on the front, a huge rear diffuser, deep vents on the bonnet and a truly giant rear wing. 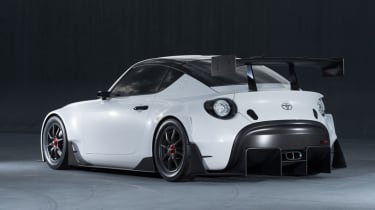 Black alloy wheels with red hubs provide the only colour on the S-FR Racing. The car hunkers down on lowered suspension, while fins by the grille and blacked-out windows complete the picture.

If Toyota ever do bring the S-FR Racing to production, it'll need a power boost over the standard car to be taken seriously though. Leaked spec sheets suggest that the S-FR will gain a 1.5-litre engine, producing 130bhp. Combined with a 980kg body those figures look tailor-made to take on the MX-5's 129bhp and 998kg.

Keep an eye out for the S-FR Racing concept along with others from Toyota at the 2016 Tokyo Auto Salon, from January 15th.

Would the Toyota S-FR sway you from a Mazda MX-5? Let us know in the comments…