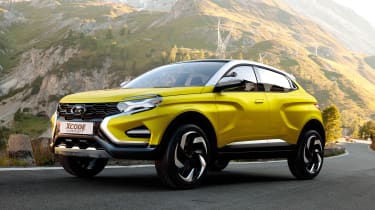 Lada is previewing a new compact SUV with a fresh concept called XCODE that has made its debut at the 2016 Moscow Motor Show.

The Russian brand - which is part of the Renault-Nissan Alliance - says the XCODE “demonstrates the possible development of the Lada model line-up”. The car has been styled under the direction of Briton Steve Mattin, a former designer with Mercedes-Benz and Volvo.

Lada says the XCODE has been created “within the framework of the design DNA that has already been successfully implemented in production vehicles Vesta and XRAY”. These two models - a saloon and an SUV respectively - have been part of a major product offensive by Lada. The firm makes extensive use of the Renault-Nissan B0 platform - the same architecture that underpins everything from the Nissan Juke to the Dacia Duster. 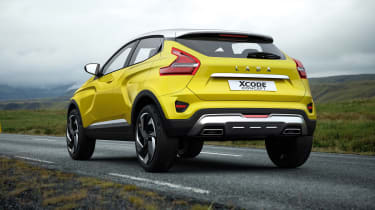 It’s likely that XCODE is also based on B0, although Lada has not provided any dimensions or technical specifications, beyond suggesting that it could use turbocharged engines and offer four-wheel drive. It’s most likely to be developed as a more expensive sister vehicle to the XRAY SUV, which entered production earlier this year and sits between B-segment SUVs and larger crossovers like the Qashqai and Skoda Yeti.

The XCODE’s exterior styling has clear cues from the XRAY, although it gets a more dramatic front end and more heavily sculpted flanks. Inside, there’s a 10-inch touchscreen infotainment system and a digital instrument cluster. Lada says the vehicle would interact with its Lada Connect smartphone app, which can do everything from opening the vehicle and switching on the heating to displaying diagnostic information and warning of impending faults.

The XCODE is the lead concept on an extensive stand for Lada at Russia’s premier motor show. The firm is also showing a sportier version of its Vesta Sport saloon and two editions of its XRAY SUV - the XRAY Cross Concept, which adds body cladding for a more rugged look, and the XRAY Sport Concept, which gets a tuned version of the regular car’s 1.8-litre engine and lowered suspension. An Allroad-inspired, rugged estate, called the Vesta SW Cross Concept, is also present.

What do you think of Lada's XCODE? Would you like to see the brand back in the UK? Let us know in the comments...