Two versions of new Devon based two-seater to go on sale this spring, with 250bhp or 350bhp. 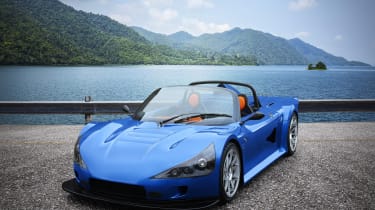 Devon based sportscar firm Avatar has officially revealed its first production model at this year’s Autosport International show. Called the Avatar Roadster, the production version is an extensive reworking of the prototype that made its debut at the same show last year, with over 100 changes.

The entry-level model uses a 2.0-litre Ford Ecoboost engine with 250bhp and 400Nm of torque. Thanks to a curb weight of 695kg, it works out at 360bhp per tonne. 0-62mph is dealt with in four seconds flat, while the top speed is a claimed 145mph.

However, sitting above the 2.0-litre version is an even more potent machine. A 2.3-litre Avatar Roadster is also set to go on sale, borrowing its engine from the new Ford Focus RS hot hatch.

There’s no weight disadvantage – the same 695kg weight applies. The 350bhp on tap equates to a power to weight ratio of 500bhp per tonne and 0-62mph drops to 3.6 seconds, with top speed climbing to 165mph. There’s more torque available too, with 440Nm.

As standard the gearbox is sourced from Ford, being the six-speed manual found in the Focus RS. However, an optional seven-speed sequential operated by paddles is available

It’s one of several race car inspired features on the Roadster, such as the composite bodywork, offset driving position, and options such as a full roll cage, plumbed-in fire extinguisher, data logger and a large rear wing.

More creature comfort based no-cost options exist in the form of Apple CarPlay and Android Auto, heating and air conditioning, and even a roof. The company promises prospective customers plenty of bespoke finishing and trim options too. Production of the Avatar Roadster will begin this spring, with prices beginning from £39,990.

Will the Avatar Roadster be a worthy track day companion? Let us know what you think in the comments.