Say hello to the Mercedes-AMG GT R of speedboats

The German marque has teamed up with Cigarette Racing to construct the Marauder AMG, a high-speed vessel inspired by the AMG GT R 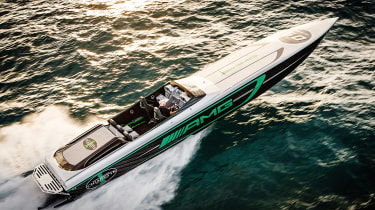 Mercedes has once again joined forces with long-term partners Cigarette Racing to design a high performance speedboat. The vessel celebrates half a century of AMG as well as ten years of the carmaker working together with the watersports specialists and is based on the new Mercedes-AMG GT R. It will make its public debut at the Miami International Boat Show.

Dubbed the Marauder AMG, the 50ft boat shares splashes of the same Green Hell Magno paintwork that adorns the AMG GT R and also has a relentless pursuit of speed in common with the flagship performance car. Beyond that though, the claimed similarities are rather more dubious.

Power comes not from a Mercedes unit, but rather from a pair of V8 Mercury Racing engines arranged in a double-overhead-cam setup. Each produces up to 1,550hp for a combined output of 3,100hp, though for this you need to engage the ‘Race Key’ and special racing fuel. If, however, you’re only popping out for a leisurely cruise downriver, the ‘Pleasure Key’ and 91 octane petrol will reduce the engines to a more sensible 1,350hp. 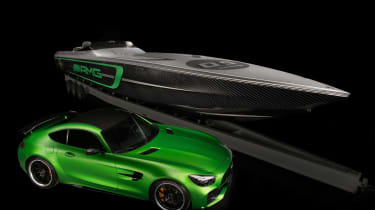 Elsewhere, a strict approach to weight shedding has yielded nearly 600kg of savings from the standard vessel, with carbon fibre employed extensively throughout the design, including on the deck, in the cockpit and on the consoles as well. Even the engine hatch has been constructed with carbon fibre, using “vacuum infusion technology” to keep the amount of material required to a minimum.

Understandably the price of the Marauder AMG hasn’t been made public, with Cigarette Racing merely stating that the figure is available at the request of potential customers. No doubt it will be astronomical.

"Performance, perfection and passion are the values that unite Mercedes-AMG and Cigarette Racing,” said Mercedes’ Tobias Moers. “Based on these values, eight sensational special editions have been created during our successful ten years of collaboration, and the 2017 50’ Marauder AMG presented here is a particular highlight among these.” 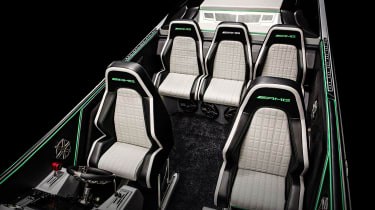 And no wonder. Already magnificently styled, Cigarette Racing drafted in Daimler AG’s Chief Design Officer Gorden Wagener to oversee the paint and detailing, which includes the specially commissioned logo on the bow of the boat.

They have missed a trick with the name though: why on earth isn’t it called the Mercedes Sea-Class?