You can now buy a £2,400 roof tent for your MINI Countryman 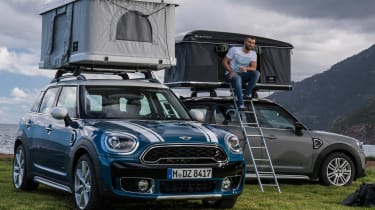 MINI has revealed a special edition roof tent accessory for its range, four years after previewing the idea on a concept version called the Countryman ALL4Camp.

In collaboration with the MINI Design Team and Italian roof tent specialists AUTOHOME, MINI has created a two person tent that fits into the dimensions of a conventional roof box for “spontaneous travellers and adventurers”.

• Best crossovers and SUVs on sale

While the AirTop roof tent has been modelled on the Countryman, MINI says that it will fit onto any MINI that has roof rails, and that no tools are required to mount it securely. The key safety concern would appear to be that occupants remember they’re on the roof of a MINI Countryman when exiting the tent during the night. 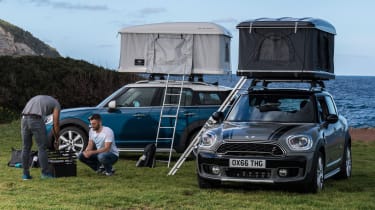 The tent is available in a choice of two colours - black or white - in keeping with the contrasting roof and mirror caps available on the new Countryman.

The housing of the tent is made with fibreglass and weighs in at around 58kg, While MINI says that the aerodynamic design of the body should offer minimal air resistance and noise on the road.

When it comes to pulling over and making camp for the night, ease of erection is guaranteed thanks to four gas pressure springs that operate when the safety clips are detached.

Inside, campers will find a high-density mattress complete with a cotton cover and pillows, while the doors and windows are equipped with mosquito nets to keep insects at bay.

Other features include a battery-powered, touch-sensitive LED light, luggage nets and pockets, and even an aluminium ladder for easy access. 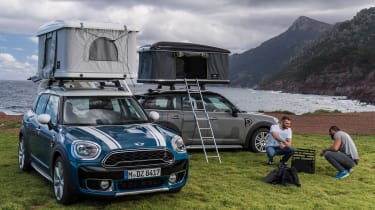 MINI tested the water with a roof tent concept in 2013, and before that the idea had been the subject of an April Fools’ Day joke by Swindon Roof Top Tent and Cowley Caravan spoofs.

While this latest offering is entirely genuine, MINI will have a job keeping a straight face when mentioning the price to customers: at around £2,400, you’d need to do a lot of camping to justify the outlay.

Would you spend that kind of money on a MINI AirTop roof tent? Let us know in the comments section...