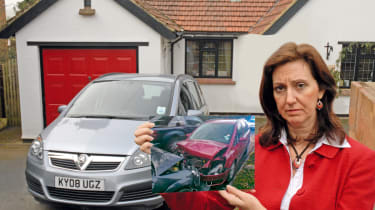 As if being involved in a major car accident isn’t bad enough, the time you have to spend dealing with everyone from the police to solicitors can add to the distress.
You’d hope your insurance company would be there to make things easy, but that wasn’t the case according to Luisa Simon Saballs. Luisa was involved in a head-on collision with an uninsured driver near her home in Chalfont St Giles, Bucks, in mid-January. Her Vauxhall Zafira was written off, while she suffered severe bruising that kept her off work for a couple of weeks.
“The accident and physical pain was traumatic enough,” said Luisa. “But I wasn’t prepared for the difficulty dealing with my insurer.” Luisa was covered by Hastings Direct, but it took the best part of a month before a replacement cost was agreed for her Zafira, during which time Luisa was left carless.
Despite having fully comprehensive insurance, Luisa wasn’t entitled to a loan car. Bizarrely, if her car had been repairable and not a write-off, she’d have been kept mobile. What’s more, Luisa couldn’t find a similar Zafira to her own for anywhere near the £3,700 value Hastings Direct put on her car.
We contacted Hastings Direct and shortly after, Luisa received an increased offer of £4,400 for her car – a similar price to the list of Zafiras for sale she’d sent to Hastings. However, Hastings confirmed that as she’d made a total loss claim, Luisa was not eligible for a loan car, but that hire cars are offered if cars are repairable.
We also asked Hastings if it would be extending Luisa’s policy as she hadn’t had use of a car for a month following the accident. The answer to that one was a resounding no.
Hastings told us that nine out of 10 customers are happy with the valuations they’re offered for their write-offs. But as Luisa said: “I wonder how many grudgingly accept the offer without realising they can challenge it.”
The problem After being involved in a crash, Luisa had to wait a month before Hastings Direct agreed an appropriate value for her car. And she didn’t get a hire vehicle.

Hasting's response It admitted it should have processed the claim faster and said it would be “rebriefing the relevant members of staff” to improve things in future.

Legal advice You can prove an insurer has undervalued your written-off car by compiling a list of cars of the same make, age and condition as yours that are on sale for more money. If that fails, appeal to the Financial Ombudsman.

Our verdict Given how expensive car insurance is, it’s not unreasonable to get a decent level of service. Luisa shouldn’t have had to wait a month for a fair valuation and shouldn’t have been left carless.