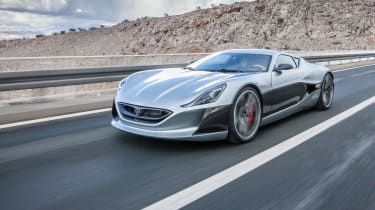 Small Croatian carmaker Rimac Automobili will debut the production version of its Concept-One at this year's Geneva Motor Show. It gets 1,073bhp from four electric motors, and a top speed of 221mph.

You might remember Rimac from the 2011 Frankfurt Motor Show, where it unveiled the concept for this car and made some bold claims about performance. It seems that the promises have come to fruition, as eight examples have been built and six have sold at a price of £676,000. 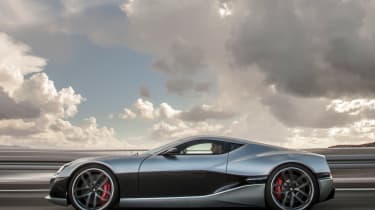 The production powertrain Rimac Concept_One features four oil-cooled electric motors mounted on each corner. The claimed combined torque output is an astounding 1,600Nm, which combined with 1,073bhp means 0-62mph in 2.6 seconds, 0-124mph in 6.2 seconds and a top speed of 221mph. In short, it's fast.

The all-wheel drive Concept_One uses an advanced torque-vectoring system that distributes power to each individual wheel, while it all goes through two single-speed gearboxes at the front and a pair of two-speed dual-clutch boxes on the back axle. Carbon-ceramic brakes help reign it all in.