A legend lives again! The MG ZT 260 has finally hit the road, recalling the spirit of glorious V8 Rovers of old. And to see if it lives up to the fine heritage, we took the car to meet one of its spiritual predecessors for the first-ever head-to-head between new star and past master. 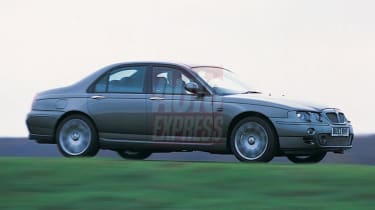 So does the ZT 260 live up to the legend? Quite simply, yes. The first V8-engined model to come from the MG Rover stable in more than 15 years is a worthy successor to the marque's cars of old, offering immense character, a cracking powerplant and massive entertainment potential from behind the wheel. The British Bulldog barks again!

A legend lives again! The MG ZT 260 has finally hit the road, recalling the spirit of glorious V8 Rovers of old. And to see if it lives up to the fine heritage, we took the car to meet one of its spiritual predecessors for the first-ever head-to-head between new star and past master.

While the MG ZT isn't strictly a Rover, it uses a 75 bodyshell and is built in the firm's factory. It follows a tradition of fine-handling, subtly sporting rear-drive cars from the Midlands maker, which began with the P5B in 1965 and ended with the demise of the SD1 Vitesse in 1987.

But the rear-wheel-drive V8 is back with a vengeance. We tried it alongside a fabulous 1972 Rover P6, regarded by many to be the best of the V8-engined Rovers of old, to find out if it's a worthy successor. As with the P6, the new car doesn't look overtly powerful. Externally, it's little different from other ZTs, with only the quadruple exhaust pipes and discreet V8 badges hinting that there's more to the MG than meets the eye.

Yet underneath the skin, the new car is significantly different from that which shares its panelwork. For starters, it's rear-wheel drive, requiring engineers to redesign the platform. It has an all-new six-mount rear subframe with multi-link rear suspension, while power is distributed through a limited slip differential to ensure smooth and predictable delivery.

The effect is a truly remarkable car, especially given MG's limited development budget compared to rivals. In hard corners it delivers limpet-like grip, the brakes are incredible and the steering feels meatier than that of other ZTs and is more communicative, too. Being rear-drive, the torque steer seen on front-wheel-drive siblings has disappeared.

Under the bonnet is the 4.6-litre V8 from Ford's US-market Mustang. Easily available and relatively cheap, this has become the engine of choice for low-volume British sports cars. Its 260bhp doesn't sound huge given the capacity, but to judge this unit on its power alone is to misunderstand it completely.

With a peak torque figure of 410Nm at 4,000rpm and a soundtrack that begs you to blip the throttle between gears, the ZT 260 is not only satisfying to drive, but thrilling, too. With 0-60mph in 6.2 seconds it's no slouch, but is let down by the gearchange. The five-speed manual box needs a good shove through the gate, while the clutch is heavy and there's nowhere to rest your left foot.

There are no such problems with the P6. Apart from the rare and desirable S versions, all 3500s had an automatic transmission. As with the ZT, the P6 hides its power under a few subtle styling tweaks. Two humps in the bonnet were added to house the rocker covers, while an additional grille under the front bumper aids cooling. Apart from the badging, the uninitiated would be hard-pushed to spot the difference. The cabin feels less sporting, too. While the ZT has figure-hugging Alcantara seats, the P6 features spongy leather trim.

But there are some close similarities between the cars. The P6 also has an American engine - while regarded as the 'Rover V8', the 3,528cc unit started life in a Buick, before Longbridge bought the rights. They sound similar, too, and although the ZT feels more raw, both have a characteristic V8 burble at idle.

Then there's the handling. The MG uses modern technology and driver aids to deliver incredible grip, but is nowhere near as advanced as the P6 was at its launch - its skeletal frame, independent rear suspension and four-wheel disc brakes were all innovative. So if the P6 was a vision of the future, the ZT 260's attributes are positively retro. The cars complement each other perfectly...