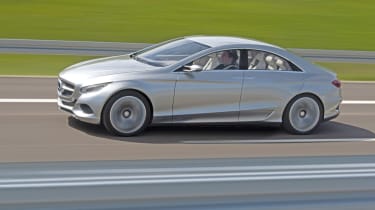 If this is a glimpse of things to come, we can’t wait for the next S-Class! The F800 is a very handsome car, and its styling should translate smoothly to a new flagship, while the new Distronic Plus system is bound to be a must-have gadget. But the plug-in hybrid drivetrain is the car’s most impressive piece of technology – it will give the S-Class immense straight-line performance, plus the ability to travel long distances on electric power alone.

Advertisement - Article continues below
It's Mercedes’ vision of the future! The sleek F800 debuted at the Geneva Motor Show in March – and now, Auto Express has got exclusive access to it.
The car paves the way for future models, and its bold lines hide some cutting-edge tech, including an advanced plug-in hybrid powertrain.
This mates a 296bhp 3.5-litre V6 petrol engine to a 107bhp electric motor, and Mercedes claims the two units provide the F800 with performance equivalent to a petrol V8. A 0-62mph time of 4.8 seconds and a top speed of 155mph
certainly back that up, as does the surge of acceleration.
Yet while the newcomer is powerful, drivers are unlikely to use the V6 on most journeys. After a full charge, the lithium-ion battery pack – mounted beneath the rear seats – delivers a range of around 19 miles on electric power at speeds of up to 75mph. Mercedes reckons the petrol engine kicks in only when the driver depresses the throttle by 90 per cent or more.
Advertisement
Advertisement - Article continues below
Power is channelled through the ultra-smooth seven-speed 7G-Tronic automatic gearbox.
Advertisement - Article continues below
The transition from electric to internal combustion power is a little jerky, but that’s not unusual for a pre-production vehicle.
Inside, it’s pure space age. The driver is met with an airliner-style, twin-section steering wheel and a swooping dashboard. A touchpad system, mounted in the centre console, takes the place of conventional cabin controls. Engineers decided against a touchscreen to avoid grubby fingerprints and help maintain a premium feel.
The seats are made from lightweight magnesium and carbon fibre, with fine netting stretched across them. The quirky cabin is rounded off by a set of electric sliding rear doors. In addition to the hi-tech drivetrain and suave looks, the F800 gets the latest incarnation of Mercedes’ Distronic Plus active cruise control system.
This was first introduced in 2005, and in its current guise, it takes over acceleration and braking at low speeds – in jams, for example. The set-up also steers the car so it follows the vehicle in front. Mercedes insists this only happens in
the confines of a lane; it won’t mimick a swerving driver.
The technology has yet to be perfected, and it cut out several times during our drive. To work properly, it requires the driver’s hands to be in contact with the steering wheel, so a full, hands-off experience isn’t possible yet.
Although the F800 isn’t bound for production, the hybrid powertrain and latest Distronic Plus system will appear on the next S-Class, due in 2014.
Rival: Jaguar Limo Green
The future is bright for Jaguar, too, if the range-extending Limo Green concept is anything to go by. It’s powered by a 145kW electric motor, backed up by a Lotus-developed 1.2-litre engine, and gives a range of 600 miles.
Advertisement
Share this on TwitterShare this on FacebookEmail
Advertisement