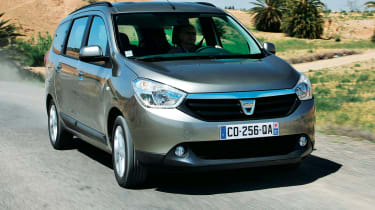 Most buyers will avoid the cheapest Lodgy – which doesn’t get electric windows, air-con or seven seats – but the posher models like the one tested here are incredible value. The interior quality and handling may not be close to the best in this class, but with savings of around £10,000 over other MPVs, buyers will be willing to compromise.

Advertisement - Article continues below
Is this the model to turn the MPV class on its head? Renault-owned Romanian budget brand Dacia will offer the Lodgy with a starting price of around £9,000, rising to roughly £15,000 for the range-topping car driven here.
It’s called the Lodgy Prestige and that price buys you a Renault-sourced 1.5-litre dCi diesel engine producing 109bhp and an equipment list including touchscreen sat-nav, electric windows, rear parking sensors and air-con. In comparison, a similarly equipped SEAT Alhambra will cost £24,020.
The cabin itself has a few flourishes, such as the gloss black centre console and chrome door handles, but all the plastics feel very hard and scratchy. Build quality isn’t a problem, though.
On the road the Lodgy rides like an old French car, with soft, wallowy suspension that flattens out bumps and potholes easily. However, handling isn’t a strong point, with huge amounts of body roll in corners.
On the plus side, there’s a good deal of sound insulation in the cabin, which reduces the noise of the rattly 1.5-litre diesel engine. Performance is good, with this model able to accelerate from 0-62mph in 11.6 seconds.
Practicality is superb: with five seats in place, the boot has 827 litres of space. Fold the middle row and remove the rear seats, and this rises to 2,617 litres. It all adds up to a great-value package.
Advertisement
Share this on TwitterShare this on FacebookEmail
Advertisement