Alfa Romeo has made some of the world's most stylish cars over the last decade. The problem is, its best looking models are also usually the least reliable. The 145 three-door hatchback and 146 four-door saloon of 1994 are perfect examples. 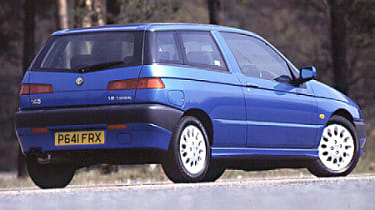 Alfa Romeo has made some of the world's most stylish cars over the last decade. The problem is, its best looking models are also usually the least reliable. The 145 three-door hatchback and 146 four-door saloon of 1994 are perfect examples. Both offer striking looks, and have stood the test of time well. However, early cars came with flat-four engines from the 33. These were poor performers and suffered from weak gearboxes. Much better were the Twin Spark units introduced in 1996. Debuting in 150bhp 2.0-litre form, 1.6 and 1.8-litre versions were also available. As long as they have been serviced properly, they should offer dependable performance. The 145 and 146 are fun to drive, but dubious build quality has tarnished their reputation. However, galvanised bodywork means rust isn't an issue, and prices have now hit rock bottom.Checklist * Cambelt: a Tricky change means dealers charge £750 - and it's done every 36,000 miles on Twin Spark engines. A specialist should do it for £400. Alfa used to quote 72,000 miles between changes, but shortened this to avoid any damage. * Gearboxes: gearboxes on boxer engines can be weak - listen for whines. * Cooling: water pumps and radiators are weak spots. Keep an eye on the temperature gauge on the test drive. Ensure the fan cuts in by leaving a warm engine idling. * Warning lights: the injector warning light is prone to coming on, due to either a sensor problem or a broken thermostat. A specialist will be able to read the fault code issued and diagnose the problem. * Engine: spark plugs are expensive for Twin Spark engines (£100 for eight) but last for 60,000 miles. TS models are more reliable than flat-fours, but high oil consumption is common on all cars.Driving Impressions Forget the boxer models - the TS variants are far superior, particularly the 145 Cloverleaf 2.0-litre. With 150bhp, it's a real hot hatch with bags of character. The handling is impressive and the chassis well balanced when cornering, while surprisingly direct steering makes both the 145 and 146 great fun.Glass's View The 146 tends to struggle on the used market and needs to be realistically priced if it has any chance of finding a home. The 145, on the other hand, is the preferred model, and although it was cheaper than the 146 when it was new, it's now worth more on the second-hand market. The 1.8 and 2.0-litre Cloverleaf models are the two variants that attract the most interest, but there are relatively few examples available. Build quality remains an issue for all.Jeff Paterson, senior editor, Glass's GuideLife With A 145 As a second-hand buy, the Alfa Romeo 145's performance and practicality make it a real bargain. Just don't expect German standards of build quality, though. MR Pimblett, Canterbury, Kent I get great performance from my 146 and the handling is fantastic. The interior materials and build quality could be better, and the fuel economy leaves a lot to be desired, too. Gary Anderson, Glasgow

The 145 and 146 have undergone major surgery for 1997, with the boxer engines being thrown out and new 16-valve units from the 155 installed. With these changes, the pair have come of age. All engines provide sporty performance, with bucket seats and an improved gearchange enhancing the enjoyment. Steering and handling are hot hatchback standard. It's a bit noisy and the ride is far from the best, but there are few family cars with more character.