Extreme in looks and pace, three-door remains a strong choice. 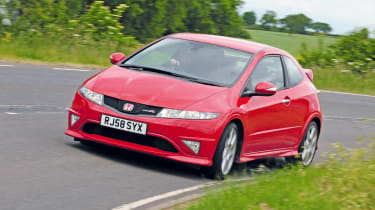 The Civic Type R has been on sale for more than two years, which makes it the old man in this trio – but does that mean it has had its day? The Honda’s striking looks have always been a matter of debate, and they continue to divide opinion here.

Inside, while the MINI is retro and the Golf is sensible, the Civic is wacky and futuristic. Yet the firm’s vision for dash design isn’t to all tastes, and the scattered layout takes some getting used to.

You also have to accept poor visibility caused by the screen-mounted rear spoiler, and it’s hard to find a perfect seating position without obscuring the speedometer. Another gripe is that the front chairs don’t return to a set position when you slide them forwards to let people into the rear.

Still, when they do get into the back, passengers have plenty of space, plus the deep boot is huge. And while the Civic doesn’t share the Golf’s upmarket materials, build quality can’t be faulted. Racy details inside include a smart metal gearlever, as well as supportive and comfortable two-tone sports seats. A prominent red start button also fires the 2.0-litre engine into life.

At idle, the normally aspirated unit is relatively refined and placid. But once you hit 5,500rpm on the rev counter, Honda’s legendary VTEC variable valve timing system kicks in, and transforms the powerplant from mild-mannered to manic.

The Type R comes into its own high in the rev range, where its touring car-style soundtrack accompanies the arrival of full power. But while the beautifully engineered 2.0-litre is happy working this hard, and its racy nature makes it characterful, it can’t deliver performance to match the other cars.

The Civic recorded a 0-60mph time of 7.1 seconds – that’s nearly a second slower than the MINI – and it simply didn’t have the in-gear responses of its turbocharged competitors. On the road, the Honda feels sluggish and you need to change down to get genuine overtaking punch. This is no chore because the six-speed gearbox has a snappy action, and the well weighted controls are a joy to use. But the Type R needs to be grabbed by the scruff of the neck to deliver performance the Golf manages without breaking into a sweat.

This hardcore character is key to the Honda’s appeal, and its handling is equally rewarding. The steering delivers razor-sharp turn-in, grip is immense and body control is good. However, the Type R’s limits are so high that it sometimes doesn’t involve the driver enough, and its stiff suspension can’t match the Volkswagen when it comes to comfort or the isolation of road noise. The Civic’s uncompromising approach is one of its major strengths – but it’s also one of its weaknesses.

Chart position: 3WHY: With a rev-hungry engine, practical cabin and unique styling, the Type R remains a real challenger.