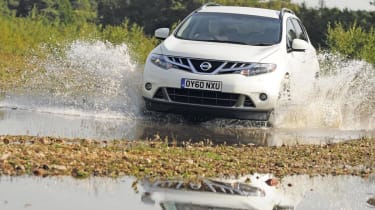 5
The best things come to those who wait – at least that’s set to be the case with the Nissan Murano. Now well into its second generation, the sporty Japanese crossover has finally been fitted with the diesel engine that British buyers have been crying out for. The 2.5-litre unit promises to mix punchy performance and strong fuel returns, while a host of styling revisions aims to further boost the car’s showroom appeal.
One thing that the Murano has on its side is its size – it dwarfs the Audi in almost every dimension. Yet thanks to its huge 20-inch alloy wheels and chrome detailing, it manages to avoid looking bulbous or clumsy. New headlamps and tail-lights further boost the Nissan’s visual impact. Inside, it immediately feels more roomy than its German rival.
But it’s not the space you’ll notice first; rather, it’s the huge amount of standard kit that catches the eye. Sat-nav, reversing cameras, heated and leather-trimmed seats, keyless go and cruise control are all fitted – you’ll have to hit Audi’s pricey options list if you want the same toys on a Q5.
Unfortunately, no amountof gadgets and gizmos can make up for the interior’s slightly low-rent feel. With its cheap-looking leather gearlever, hard plastic sat-nav surround and some dated switchgear, the Murano’s cabin lacks premium appeal.
However, the high-set driving position gives a great view of the road, while occupants in the rear get masses of leg and headroom. The shallow 402-litre load bay is far smaller than the Q5’s, at 540 litres, although folding the rear bench flat frees up a sizeable area. An automated mechanism makes this extremely easy to do.
The Nissan also had to accept second place at the test track. With its smaller 2.5-litre engine, it’s no surprise that the Murano was slower. It took 10.5 seconds to complete the 0-60mph sprint – that’s a full three-and-a-half seconds longer than the Q5.
On the road the differences are harder to detect, due to the four-cylinder unit’s muscular 450Nm of torque, which is available from a low 2,000rpm.
Performance tails off sharply further up the rev range, though, and while the six-speed auto box shifts smoothly, its sluggish responses further hamper progress. What the car lacks in performance it makes up for with comfort, thanks to a supple ride and decent refinement. The pay off for the soft ride is plenty of body roll through corners.
Light steering and the slow-witted transmission further blunt the Nissan’s driving dynamics. The brakes are positive, though – for a model of this size, a stopping distance of 49.9 metres from 70mph is good.
Neither of these cars promises to be particularly economical, but the Murano’s return of 25.1mpg was especially disappointing. Adding to the newcomer’s woes is an emissions figure of 210g/km, which is higher than the faster and more powerful Q5.
There’s no doubt that the diesel Murano is a massive step forward over the petrol version. But is it enough to beat the talented Audi?