It’s not as fast, but Maranello’s beauty serves up an intoxicating blend of performance and poise 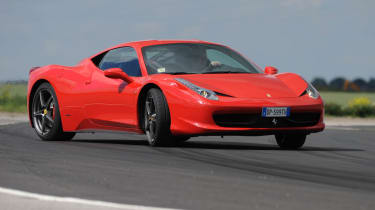 9
If the McLaren wants to take the title of best sports car in the world’, then there’s one rival it must beat: the Ferrari 458 Italia. Take a look at the MP4-12C’s vital statistics and it’s clear it was the template for the newcomer.
Video: we test the Ferrari 458 Italia on a specialist test track
[[{"type":"media","view_mode":"content_narrow","fid":"79243","attributes":{"alt":"","class":"media-image"}}]]
They’re almost identical in size, are both powered by mid-mounted V8 engines, feature seven-speed twin-clutch manual transmissions and have price tags of around £170,000. However, while the McLaren’s exterior was designed in the wind tunnel of the British firm’s Woking HQ, the 458 benefited from the efforts of Italian styling house Pininfarina.
Advertisement - Article continues below
As a result, the Ferrari delivers more visual impact than its rival. From its wide, aggressive snout, through to its pinched waist and muscular rear wheelarches, the 458 looks every inch an exotic supercar. Its tightly wrapped bodywork looks like it has been draped over the working parts, without an inch of fat to spare.
Access to the Italia’s low-slung cabin is straightforward thanks to its conventional doors, which open to reveal an interior that’s roomier than the McLaren’s. Finding a perfect driving position is easy, even though the Ferrari does without powered adjustment for its figure-hugging seats. After the simple and straightforward layout of the MP4-12C’s dash, the 458 feels a little over the top. In front of the driver is a large, centrally mounted rev counter, flanked on either side by two TFT screens that display everything from the fuel level to the sat-nav. They’re easy to read, but controlling them via the rotary controls takes a little practice.
Advertisement
Advertisement - Article continues below
As with the rest of the dashboard, the Ferrari’s steering wheel is festooned with buttons, including switches for the indicators, headamps and wipers – there are no column stalks.
Advertisement - Article continues below
The trademark Manettino switch allows you to tailor the ESP, traction control, suspension and gearshift settings to suit the conditions. But the first thing you’ll notice is the big red starter button.
Prod this and the 562bhp 4.5-litre V8 barks into life, and straight-line performance is epic.
The 458 doesn’t blast off the line with the same ferocity as its rival, but using the launch control is child’s play. Simply press the button, hold the car on the brake with your left foot and press the throttle flat. The car’s electronics determine the correct amount of throttle, and when you release your foot from the brake, the car spears towards the horizon in 3.3 seconds. That’s two-tenths slower than the lighter and more powerful MP4 12-C. Raw performance figures don’t do the 458’s engine justice, though...
What sets it apart is the intoxicating soundtrack of its powerplant. At low speeds, the noise levels are kept to a minimum as only one of the three centre exit exhausts is in use. Floor the throttle and all the tailpipes are opened, creating a spine-tingling howl that’s normally the preserve of red-blooded race cars.
Advertisement - Article continues below
Adding to the fun is the clever seven-speed twin-clutch gearbox, which delivers brutally fast shifts in Manettino’s ‘Race’ setting, but serves up smooth, fully automatic changes when you just want to cruise. And we preferred the Ferrari’s spring-loaded shift paddles. They’re mounted to the steering column and have a more positive action than McLaren’s one-piece rocker-style set-up.
The Ferrari doesn’t have everything its own way, and has to give best to the MP4-12C through a series of corners, as the Brit resists body roll more effectively, generates more grip and is ultimately faster. Despite its ultra quick and direct steering, adaptive dampers and wide, low-profile Michelin tyres, the 458 can’t match the MP4-12C’s grip.
In tight corners, the Italia’s nose washes wide earlier, while switching the traction control off means you’re more likely to suffer from lurid tail slides. Crucially, though, it’s more engaging to drive.
The mid-engined chassis is beautifully balanced and the standard carbon ceramic brakes serve-up a winning blend of eye-popping stopping power, feel and progression.
However, there’s no getting away from the cold, hard facts: the 458 is slower than the MP4-12C, both in a straight-line and through the corners. Will this cost it victory, or will its stunning looks, soulful engine and entertaining character keep it at the top of the tree?

WHY: Our 2010 Performance Car of the Year is a formidable opponent, mixing elegant looks with effortless pace and everyday useability. But it’s outgunned by the new British-built upstart...