The McLaren 12C marks the British firm's return to road cars, and it's an impressive all-round effort, with genuine everyday usability 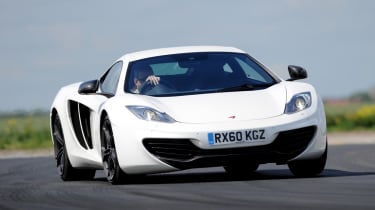 Designed to go head-to-head with the Ferrari 458 Italia and establish McLaren as a global road car brand, the 12C epitomises McLaren’s fanatical dedication to engineering excellence. In response to customer feedback, 2013 model year cars feature a raft of updates (which McLaren will add to existing cars free of charge) including a revised 616bhp engine (up from 592bhp). The software has also been reworked to improve throttle response improved, along with faster and smoother gear changes. Plus, changes to the induction noise answer criticisms that early cars didn’t have enough aural drama.

At the heart of the 12C is an advanced composite chassis. The carbon-fibre MonoCell weighs just 80kg and is incredibly stiff. High-tech suspension does away with conventional anti-roll bars and limits body roll via hydraulically controlled dampers, while the turbocharged V8 engine is bespoke to the 12C. The end result is sensational. Body movement is non-existent, power delivery is ferocious and the handling is razor sharp. Front-end grip and steering response is racecar-like in its responsiveness, yet a surprisingly supple ride and great visibility mean this a supercar you can live with.

Cars like the 12C are not cheap to run. Ferrari offer free servicing on the 458 Italia but you’ll have to pay to have your McLaren maintained. Given that it has more than 600bhp, the 12C’s official fuel economy figure of 24.2mpg isn’t too bad. In fact, with CO2 emissions of 279g/km, it’s relatively efficient. Demand is high for the McLaren, too, so residual values are strong.

With form following function, the 12C’s design owes a lot to the wind tunnel. The sleek lines and large air intakes and vents are designed with airflow management in mind. Modern and eye-catching, the 12C arguably lacks some of the extra visual drama of the Ferrari 458 Italia, but there’s huge scope for personalisation. The glass rear screen affords a view of the 3.8-litre V8, while the exhausts exit above the rear number plate.

Even people lucky enough to own a McLaren have luggage and, for a mid-engined sports car, the 12C is reasonably practical. The deep nose boot has a volume of 144 litres and there’s a handy shelf behind the seats. The interior is roomy, all the controls are perfectly placed and visibility is excellent. Dated rivals like the Lamborghini Gallardo are cramped and poorly laid out in comparison. For £3,550, McLaren even offers a system that raises the nose to increase ride height, allowing you to get into car parks.

Amazingly, the 12C is so strong that none of the mandatory European crash tests damaged the carbon MonoCell beyond repair. Just as in Formula One, the composite tub acts as a survival cell for occupants. The traction and stability control systems are superb, while McLaren’s clever brake steer system helps traction, too. Brake performance is amazing and Pirelli has even developed a bespoke winter tyre to keep your 12C moving in snowy conditions. That said, parking sensors and a warning triangle are only available as cost options. 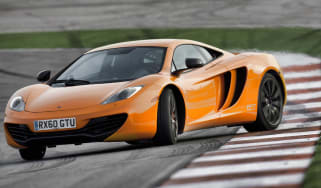 MP4-12C is faster than the F1, easiest supercar to drive ever and a true technological tour de force
Visit/mclaren/650s/87644/mclaren-650s-gt3-revealed 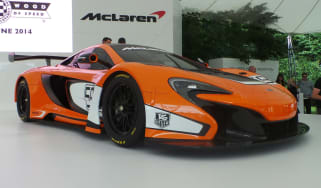 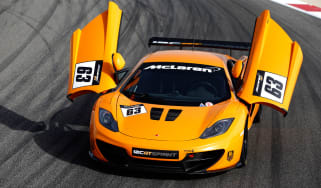 Purposed built for the track, the McLaren 12C GT Sprint will cost £195,000 it has been revealed
Advertisement
Visit/mclaren/12c/63406/mclaren-12c-spider 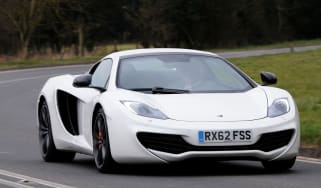 We deliver our verdict on the new McLaren 12C Spider, which has finally arrived on British roads
Visit/mclaren/12c/spider 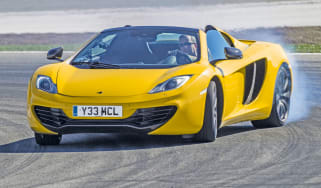 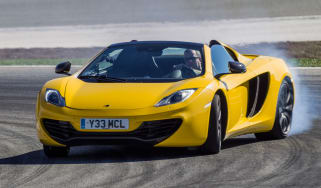 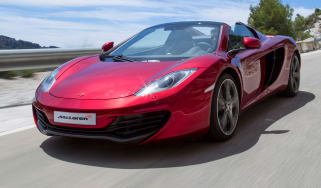 Open-top version of the McLaren MP4-12C supercar is set to take on the Ferrari 458 Spider, with a 0-62mph time of 3.1 seconds
Visit/car-reviews/14437/mclaren-vs-ferrari 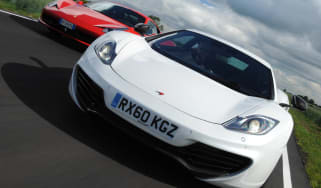 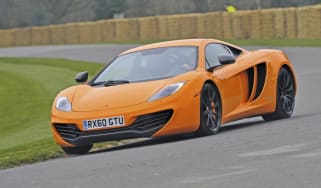 We get an exclusive UK drive in McLaren's MP4-12C supercar, taking it up the hill at the historic Goodwood Festival of Speed
Skip to HeaderSkip to Content