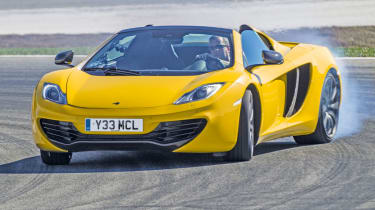 McLaren designed the 12C as a Spider from the outset, and it shows. The two-part composite roof is very well engineered and incorporated neatly into the styling. More importantly, from behind the wheel, the Spider feels dynamically identical to the coupé. Besides the Ferrari 458 Spider, few cars can rival the blistering performance, pin-sharp handling and engineering excellence of this stunning sports car. Even though it costs nearly £20,000 more than the coupé, it’s easy to see why 80 per cent of 12Cs sold are likely to be Spiders.

“No roof. No compromise.” That’s the bold slogan being used by McLaren for its new 12C Spider. Right from the outset, the supercar was designed to be sold as a coupe and a convertible, with the carbon fibre MonoCell chassis requiring no additional strengthening to retain its rigidity with the roof removed.

In theory, the traditional handling and performance compromises demanded by convertibles don’t apply here. So has McLaren hit the sweet spot and created the ultimate, best-of-both-worlds supercar?

It certainly looks the part. In fact with the roof up, at a quick glance, you’d be hard pressed to spot that this is the Spider, not the coupe. But look harder and you’ll notice that the sloping rear screen has been replaced by a clamshell and a pair of large buttresses. Between them is a small section of glass, allowing a glimpse of the V8 engine.

At the touch of a button, the rear deck flips back and the two-part composite roof folds neatly away. The process takes only 17 seconds, and can be performed at up to 25mph, while the glass rear screen automatically moves into the ideal position to limit buffeting. With the roof down at 80mph, it’s not too blustery, plus you can lower the glass screen when the top is in place, to increase the volume from the exhausts.

The beautifully made interior is unchanged from the coupe’s, as is the 144-litre boot in the nose. But with the roof up you can use the area beneath the clamshell as additional luggage space, which is a neat touch.

As with the 2013 model year coupe, the Spider gets the revised 3.8-litre twin-turbo V8 engine, with 616bhp (up from 592bhp), while other changes to the ECU give faster and smoother shifts from the twin-clutch gearbox.

On the road, the urgency of the acceleration and potency of the power delivery are astonishing, but controlling the explosion of performance is easy thanks to pin-sharp throttle response. The revised V8 revs 500rpm higher – up to 8,500rpm – but there’s so much performance low down in the rev range that you rarely need to trouble the upper reaches of the engine.

Having said that, the Spider’s retuned exhaust means you’ll want to use all the revs to savour the soundtrack. It still isn’t as tuneful as the normally aspirated V8 in a Ferrari 458, but repositioned side vents mean you hear a lovely turbo chirrup as you back off the throttle. Plus, the Intake Sound Generator, which feeds noise into the cabin, can be adjusted independently of the powertrain and chassis buttons (via the main control screen), so you can have more or less noise in any of the car’s modes.

As with the coupe, you can independently configure the chassis and powertrain in Normal, Sport and Track settings, using two rotary switches. One dial tightens roll stiffness and damping, while the other adjusts throttle response and gearshift speed. The Spider has lightning-quick reactions, no matter how it’s configured, though.

The steering is fast, naturally weighted and accurate. In fact, there’s so much front-end grip that even in tight corners at high speed, it refuses to understeer. The absence of body roll means you can tighten your line, without fear of the weight transfer upsetting the car’s balance.

This planted stance on the road comes from the clever hydraulically controlled suspension, which does away with conventional mechanical anti-roll bars and controls lateral movement with interconnected adaptive dampers instead.

The sophisticated suspension helps comfort, too, as the 12C rides well for a focused sports car. It’s firm but composed, and doesn’t thud or crash into every bump, while there’s never a hint of twist or creaking around the A-pillar – proof that the Spider is every bit as rigid as the coupe.

A Ferrari 458 Spider is more ‘in your face’, but that doesn’t mean the McLaren is short of character. It’s obsessively well engineered, with no dynamic compromises – and negligible drawbacks in terms of styling.

So it’s difficult to imagine why anybody wouldn’t choose it over the coupe. The Spider is £19,500 more expensive than the coupe, at £195,500, but as the average 12C driver spends an extra 20 per cent on options, that’s unlikely to deter the lucky few who are in a position to buy this car.