MP4-12C is faster than the F1, easiest supercar to drive ever and a true technological tour de force 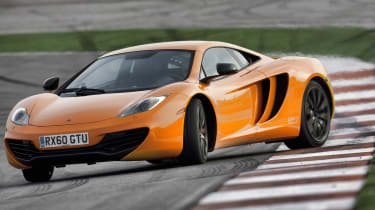 The launch of the MP4-12C throws down the gauntlet to Ferrari. What’s amazing about this first model from McLaren Automotive is that it’s such a complete package right from the start – something that has taken other supercar manufacturers decades to attain. For some buyers, it may be a bit clinical in the way it demolishes quality opposition, such as the 458 Italia, in terms of handling, acceleration, braking, build quality and everyday useability. But the MP4-12C is now the car for all the world to beat.

From the firm that brought you the legendary F1 comes an incredible all-new supercar – a machine that’s been personally signed off by Formula One drivers Lewis Hamilton and Jenson Button. The MP4-12C has been designed to translate McLaren’s winning ways from race circuit to road, and Auto Express has driven it!

The company has enjoyed incredible success in the grand prix world, securing 12 drivers’ titles and eight constructors’ crowns since 1966. Now, with the formation of McLaren Automotive – under Sir Ron Dennis – it’s also determined to take on Ferrari away from the racing arena.

As you’d expect, McLaren Automotive, like the F1 team, is not a company that does things by halves. Before we got in the car, Dennis told us we should prepare ourselves for “the best handling sports car in history”. 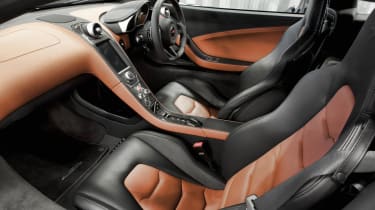 It might seem easy to be sceptical, but throughout the full range of driving conditions we experienced – dry track, damp track, on good and bad local roads – we came away knowing that McLaren has achieved a significant breakthrough.

Firstly, it has succeeded in bringing the kind of technology that would more usually be seen in a £500,000 supercar into one that costs £168,500. For example, the MP4-12C features a MonoCell chassis, which is made entirely of carbon fibre, weighs only 75kg and is more rigid than anything available from Ferrari or Porsche.

If an owner ever has an accident, repairs are relatively simple. The front and rear aluminium structures bolt on and off, and the composite and aluminium exterior panels are easily replaced and cost considerably less than the carbon-fibre alternative.

The beautifully engineered cantilever wing doors look fantastic, but it’s the McLaren ProActive Chassis Control (MPCC) that steals the show. While many manufacturers offer adaptive systems, this revolutionary set-up puts the McLaren ahead of its rivals. 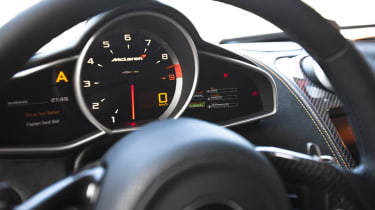 On the left of the narrow centre console is a dial marked ‘H’ (for handling), which allows you to switch the suspension, steering and electronic stability control between Normal, Sport and Track modes. A similar dial on the right wears a ‘P’ (for powertrain), and it has the same modes to tweak the response of the gearshifts and engine, plus manage the sound of the powerplant in the cabin.

On the move, the MP4-12C is incredible. With no assistance from any heavy, stiffening cross braces fore or aft, the adaptive dampers, with electro-hydraulic roll control, provide the cornering ability of an Ariel Atom. You can feel every part of the tyres’ tread pattern squirming and gripping the road. There no nosedive or rear squat, either.

But this system doesn’t detract from B-road comfort, especially if you switch the H and P dials to Normal. When cruising, the MPCC dampers offer a super-smooth ride, too. 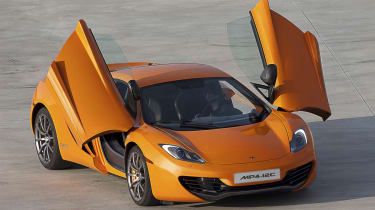 McLaren claims the MP4-12C can sprint from 0-62mph in 3.1 seconds – and we believe it. In slippery conditions on a Portuguese test track, with the launch control switched on, we recorded a time of 3.5 seconds.

Where the McLaren blows its rivals away, though, is in acceleration to 125mph. The 458 takes 10.4 seconds, but in its hottest trim, the MP4-12C does it in 8.9 seconds – only the far more expensive Bugatti Veyron faster. These numbers beat even Ferrari’s best Enzo, too. The newcomer’s 6.1-second 0-100mph time is faster than McLaren’s original, more powerful F1 road car – a testament to the traction control and slick seven-speed gearbox.

The MP4-12C’s fuel efficiency and emissions are unbeatable in this class. It puts out less CO2 per horsepower than a Toyota Prius hybrid! Perhaps the only feature that’s missing is the noise – the MP4-12C’s angry-but-smooth V8 sounds far more clinical and refined than a screaming Ferrari 458 Italia.

Thanks to the large carbon ceramic brakes on our car, and the spectacular rear Air Brake flap, stopping power is superb. The handling is awesome, too. In addition to MPCC, the MP4-12C gets McLaren’s rear-wheel Brake Steer system – which brakes the inside wheel, if necessary, to keep you on course. On the exit of tight bends, Brake Steer then also jumps in to minimise time-wasting wheelspin. The result? The MP4-12C always goes where you aim it. 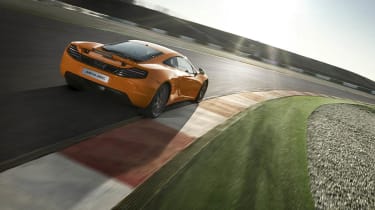 The seven-speed Seamless Shift Gearbox is always up to the task, too. Paddleshifts are silky smooth and rapid, while Pre-Cog – an F1 feature that pre-selects the next ratio – eliminates any hesitation, making for instantaneous gearchanges.

Visibility is good, and the McLaren is easy to live with on a daily basis. It’s slightly smaller than a Ferrari 458, although cabin space is plentiful and there’s a 144-litre load area.

In this first partial year of MP4-12C manufacture, 1,000 units will come from the firm’s factory in Woking, Surrey, to satisfy all world markets. In the UK, there’s now an 18-month waiting list, with the first cars scheduled to be delivered in May. Expectant owners can watch their model being built day after day via the Internet if they choose.

After delivery, the McLaren Owner Experience will help the lucky few stay fortunate and fast on track days. The MP4-12C is a remarkable product from a remarkable company. It distils the values of the McLaren brand – technological expertise, efficiency and sheer speed – into a stunningly useable package. 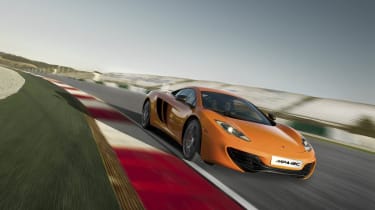 Our only criticism is that it’s a little lacking in character, in the way it looks and sounds. Still, never before has so much performance been so accessible. This is a worthy successor to the original F1, and a fantastic way to launch a new company.

Our favourite supercar of 2010 is still the champ, at least until we can officially drive the McLaren in the UK. The 458 Italia is the definition of mid-engine V8 high performance, and looks great. This is set to be a battle royal.
Share this on TwitterShare this on FacebookEmail