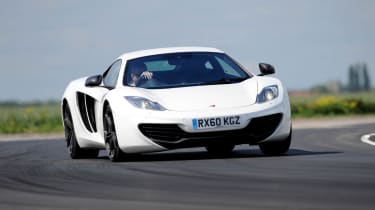 12
If one car epitomises the uncompromised pursuit of performance, it’s the original McLaren F1. And the three-seater supercar has left the MP4-12C with a lot to live up to...
McLaren is obviously keen to harness the F1’s legendary status and its new junior model shares a few of its trademark touches. A pop-up airbrake at the back deploys to improve stability under braking and it also features scissor doors.
Advertisement - Article continues below
Video: we test the McLaren MP4-12C on a specialist test track
[[{"type":"media","view_mode":"content_narrow","fid":"79244","attributes":{"alt":"","class":"media-image"}}]]
The styling of the MP4-12C owes a lot to the wind tunnel, so it shares the low-slung look of its predecessor. While undoubtedly sleek, it’s not as eye-catching as its Italian rival, although buyers who crave exclusivity will appreciate the McLaren’s rarity value, for the time being at least. Climbing aboard is part of the supercar experience, as you won’t find conventional door handles on the MP4-12C. Instead, you simply run your hand over a sensor located on the door panel to release the catch.
You can then lift the door upwards and forwards, before sliding easily across the narrow sill. You sit low and towards the centre of the car, almost rubbing shoulders with your passenger. Visibility is brilliant for such a focused machine, but you can say the same about the Ferrari. And the 458 is more spacious inside.
The dashboard in the MP4-12C is simple but effective and build and material quality are both first rate. A large rev counter dominates the instruments, with screens on either side keeping you informed about the car’s various features.
Advertisement - Article continues below
Advertisement
Advertisement - Article continues below
It’s not perfect, though, as there’s a lack of oddment stowage space inside and we noticed a surprising degree of wind noise from around the door mirrors at high cruising speeds.
We were unable to test the touchscreen sat-nav and control system on to our early production model, but customer cars feature a seven-inch portrait display for the in car entertainment, Bluetooth and built in iPod connection and music hard drive. Beneath it are dials for fine-tuning the Powertrain and Handling settings, with a choice of Normal, Sport and Track for each. Pressing a separate silver button on the centre console sparks the 3.8-litre twin turbo into life. It develops 600Nm of torque from only 3,000rpm, which accounts for the MP4-12C’s staggering pace.
Against the clock, and fitted with sticky Pirelli P-Zero Corsa tyres, it blasted from 0-60mph in only 3.0 seconds. Keep the throttle planted for another 3.2 seconds and you’ll hit 100mph – half a second sooner than the 458.
The seven-speed twin clutch gearbox can claim some of the credit, too. It’s operated using a single-piece rocker behind the wheel, just like the brand’s F1 cars. A gentle pull of the lever primes the gearbox, while firm pressure engages the next gear, providing smooth and seamless acceleration. It’s incredibly slick, but our testers all preferred the paddleshifters of the Ferrari, which provide a more pleasing blip of the throttle on downshifts.
Advertisement - Article continues below
The McLaren isn’t simply about irresistible pace. Its clever ProActive Chassis Control system uses a double wishbone set-up and interlinked adjustable hydraulic dampers, which reduce body roll in corners without compromising ride comfort.
The wheels thump noisily over cats’ eyes even in the softest setting, but low-speed ride comfort is a match for the Ferrari and it’s more composed than the 458 in corners, where the body stays flat in Track mode. It takes a while to get used to, but once you do, you can attack corners with real commitment. Go in too fast and the optional carbon ceramic brakes (£9,770) provide immense stopping power, and the clever Brake Steer facility will intervene.
It momentarily brakes the inside rear wheel to keep you on the desired line, so you can brake far deeper into corners than you imagine and cover ground at incredible pace.
This technology flatters your driving and hides your mistakes, but there is a downside. The feisty Ferrari isn’t ultimately as capable, but we think it’s more likely to put a smile on your face – and that could be the Brit’s undoing...

WHY: One of Formula 1’s biggest hitters has joined the supercar fray again. The new MP4-12C carries a huge weight of expectation but only a fool would bet against Ron Dennis’s talented outfit.