Does the three-door Astra GTC deliver on the promise of its racy looks? 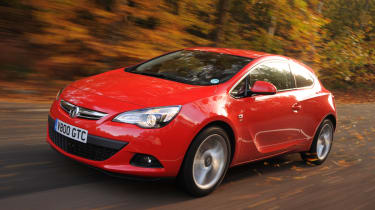 8
Vauxhall has a strong record in the fashionable coupé class. The Calibra – revealed in the late eighties – was the first in a string of stylish models from the company that have managed to combine head-turning looks with surprising family friendly versatility. The latest addition to this line-up is the Astra GTC.
One glance at the newcomer is all it takes to realise it has the visual ingredients to succeed. The Astra takes its cues from the stunning GTC concept car that debuted at the Paris Motor Show in 2010, and is an incredibly sleek and stylish design.
Video: watch CarBuyer's video review of the Astra GTC
[[{"type":"media","view_mode":"content_narrow","fid":"68711","attributes":{"alt":"","class":"media-image"}}]]
When viewed from the front, it looks very similar to its five-door hatchback brother. However, the GTC’s bodywork is all-new, with only the door handles and roof aerial carried over from the regular model.
Move around to the side of the car and you’ll notice the steeply rising waistline, muscular shoulders and bold creases cut into the flanks. The range-topping SRi model gets 18-inch alloy wheels as standard, but our test car was equipped with huge 19-inch rims, which are a £565 option.
No matter what wheels you select, the GTC easily rivals the stylish Renault for visual impact, although its looks don’t have the stand-out appeal of the Scirocco.
Sadly, Vauxhall’s designers haven’t put in as much time or effort on the interior, as the dashboard and major controls have been lifted straight out of the five-door. There’s no real sporty focus to match the exterior.
Even so, you get a solidly constructed and smartly styled layout that has the same upmarket feel as the VW. Neat touches on the SRi include the ambient lighting package, which bathes the interior in a moody red glow at night. There’s also a chunky, leather-wrapped, three-spoke steering wheel and extremely supportive front sports seats.
And while some of the audio controls are confusing to use, the rest of the cabin is logically laid-out, and all the switchgear works with slick precision. But what really impresses is the GTC’s practicality. The rear bench will seat three adults, all of whom will find they have more head and legroom than in the other cars in this test. What’s more, there’s plenty of storage, with useful cubbies and compartments scattered all over the interior.
Annoyingly, the button to open the tailgate is particularly well hidden by a recess in the bumper, however, it lifts to reveal a generous 380-litre boot – that’s 68 litres more than the Scirocco. And if you need even more space, you can fold the rear seats flat to free up a family hatch-rivalling 1,165 litres.
On paper, the Vauxhall should also hold an advantage when it comes to straight-line pace. Its 163bhp 2.0-litre diesel is the most powerful engine here, and the 350Nm torque output promises strong mid-range urge.
Yet the Astra’s hefty 1,495kg kerbweight blunts performance, with the sprint from 0-60mph taking 8.9 seconds. That’s only two-tenths quicker than the much less powerful Scirocco.
What’s more, the CDTI engine sounds gruff at idle and feels breathless when worked hard. At least there’s lots of overtaking pace, plus the six-speed manual gearbox has a weighty and precise action.
Away from the test track, Vauxhall has worked hard to boost the Astra’s driver appeal. The GTC uses the clever HiPerStrut front suspension from the Insignia VXR, while at the rear the set-up has been lowered and stiffened. Engineers have also fine-tuned the steering to meet the tough demands of UK roads. Plus, our test car was fitted with the £790 optional FlexRide adaptive damping system.
As with the similar set-up on the Scirocco – which is included as standard – you can select a Sport mode for sharper handling. However, the Astra goes further, as it also sharpens the throttle response, adds extra weight to the steering and turns the instrument backlighting a menacing red. What’s more, you can manually adjust all these settings to your personal preference.
Sadly, none of the combinations makes the GTC more engaging to drive. There’s a huge amount of grip and excellent poise, but the controls offer little in the way of feedback. And while Tour mode softens the suspension, the Astra still suffers from a firm low-speed ride.
At least it should be a cost-effective choice, thanks to low CO2 emissions of 127g/km and respectable fuel economy on test of 33.5mpg. Add in the stunning looks, upmarket cabin and family friendly versatility, and it’s clear the desirable GTC is in with a real shout of victory.

Chart position: 2WHY: The GTC aims to achieve what the five-door Astra couldn’t, by toppling its rivals. It has the looks to succeed, but what about the rest of the package?