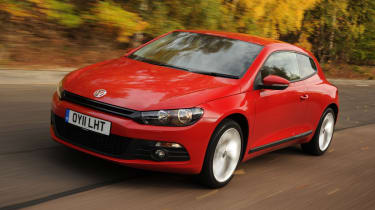 8
The boldly styled VW Scirocco has always been an Auto Express favourite. With its striking looks, hot hatch handling and decent practicality, it sets the class standard. Add the recently introduced BlueMotion eco tweaks, and this is as close as it’s possible to get to a zero-compromise coupe.
Parked alongside its hatchback-based rivals, the Scirocco’s wide and low stance is much more obvious. An aggressive low nose, bulging shoulder line and upright rear end add to the car’s considerable visual impact.
And while the three-year-old VW has become a familiar sight on UK roads, it still manages to turn heads – although it’s worth noting that the distinctive 18-inch Interlagos alloy wheels on the car in our pictures are a £445 optional extra, to replace the standard 17-inch rims.
As with the Astra and Megane, the Scirocco is a bit of a letdown inside. There’s nothing wrong with the robust build and upmarket materials, but the cabin takes too much of its design from mainstream models. The dashboard is from the Eos, while other fixtures and fittings come from the Golf.
Still, the wide range of seat and wheel adjustment makes it easy to get comfortable, while there are plenty of gadgets and gizmos on offer. An iPod cable, Bluetooth connection and auto-dimming rear view mirror are all included as standard.
Unfortunately, the Scirocco takes the wooden spoon when it comes to practicality. Unlike its rivals in this test, it’s a strict four-seater. And while those sitting in the back get more head and legroom than they’ll find in the Megane, the high-backed seats limit rearward visibility for the driver.
Behind the upright tailgate is a deep and well shaped boot. However, it trails the Vauxhall and Renault in the space race, as it can only swallow 312 litres of luggage. At least the rear bench can be folded flat, liberating a healthy 1,006 litres of space.
The Scirocco was also left behind by its rivals at the test track. Its 140bhp 2.0-litre TDI engine is the least powerful here, and that’s reflected in the car’s weaker straight-line pace. It needed 9.1 seconds to complete the 0-60mph sprint – a full half a second more than the Renault. Yet in the real world, the differences are hard to detect.
The VW’s common-rail engine is smooth and keen to rev, allowing you to make the most of the available performance. But it’s the chassis that shines brightest. Standard adaptive dampers allow you to stiffen the suspension for sharper handling, or soften it for a more relaxing ride. Perfectly weighted controls, decent feedback through the steering wheel and a crisp gearshift all add to the Scirocco’s dynamic advantage.
What’s even more impressive is that these talents won’t cost owners the earth. The addition of VW’s BlueMotion technology results in incredibly low 118g/km CO2 emissions, while rock-solid residuals make the car a sensible long-term bet. On this evidence, the Scirocco is going to be tough to beat.

Chart position: 1WHY: The Scirocco is the only car here that doesn’t have a five-door equivalent, so it stands alone in the VW range. It’s a classy, distinctive and capable coupe.