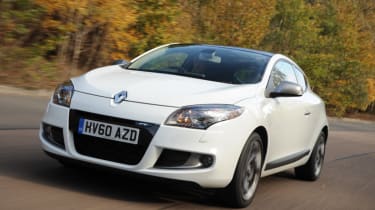 8
The Renault Megane takes some beating for sleek coupe appeal. In rakish three-door guise, it combines head-turning looks, terrific value for money and family friendly versatility. What’s more, a punchy 2.0-litre diesel and sharp chassis make it as good to drive as it is to look at.
Despite having been on sale for nearly three years, the Megane still packs plenty of kerb appeal. In fact, with its steeply rising waistline and high-set tail, it could have been used as a template for the Astra. Our top-of-the-range GT Line model was given a visual boost by a neat bodykit and eye-catching 18-inch alloy wheels.
Advertisement - Article continues below
Climb aboard and the cabin is pure Megane. Apart from the long doors and smaller glass area, you could easily be sitting in the five-door. That means you get the same attractively designed dash, decent-quality materials and low-set driving position.
It’s packed with standard kit as well. Sat-nav, Bluetooth and dual-zone climate control all feature; add all this to the Astra and you’ll have to fork out an extra £1,380. There are some frustrations, though.
The radio is fiddly to use, plus the ugly sat-nav housing on top of the dashboard looks like an afterthought. And while the plastics have a classy look, the interior doesn’t feel as solidly put together as
either rival’s. And the dials look cheap.
Still, we have no complaints about practicality. The Megane isn’t quite as spacious in the rear as the GTC, but it will accommodate five adults at a pinch. There’s also plenty of useful storage, including
Advertisement
Advertisement - Article continues below
hidden lidded compartments in the front footwells. Plus, while the boot is held back by a high loading lip, it offers 32 litres more space than the Scirocco, at 344 litres.
Advertisement - Article continues below
Performance is more important than practicality for many coupé buyers, though, and in this respect the Megane doesn’t disappoint. At the test track, its slightly gruff 158bhp 2.0-litre diesel provided superior pace.
The car was three-tenths quicker than the Astra in the sprint from 0-60mph, recording a time of 8.6 seconds. The Renault was even more dominant in our in-gear tests, where its terrific mid-range punch translates into strong overtaking pace.
With a chassis tuned by the legendary Renaultsport department, the Megane is an engaging companion on twisting back roads. Well weighted steering, excellent body control and strong grip combine to make it a composed and agile choice, with its notchy gearshift the only fly in the ointment. But the trade-off for this sharp handling is an extremely firm ride – unlike its rivals, there’s no adaptive damper option.
And the problems don’t end there. High CO2 emissions make the Renault a costly company car choice, plus weak residuals will hit private buyers. So, will these flaws halt the car’s charge for the top of the podium?

Chart position: 3WHY: If you want a bit of flair from your family hatch, the Megane is the answer. The Coupé combines space and style in a great-value package...