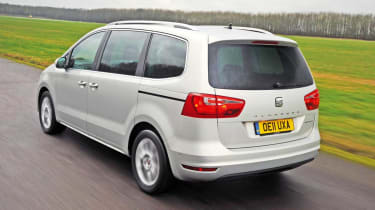 8
Our reigning class champion has set a high benchmark for all seven-seat MPVs, with space and comfort to spare. So is the SEAT Alhambra’s position at the top under threat from the new Zafira Tourer?
It certainly can’t match it for style. The big SEAT has none of the quirky flair that defines the company’s smaller models, and opts for a neat, conservative look that closely mirrors its VW Sharan sister car. The beautifully detailed bi-xenon headlights are a striking feature, but they’re a pricey £895 option – and without them, the Alhambra’s nose lacks panache.
Thanks to the unsightly sliding door rails on each flank, plus a roofline that’s 55mm taller than the Vauxhall’s, the SEAT is also the most van-like MPV here. Unlike its rivals, it doesn’t get extra glass in the A-pillars, which hampers visibility when pulling out of tight junctions.
Yet as soon as you climb aboard, the benefits of the Alhambra’s extra bulk become clear. That higher roofline means it’s much easier to clamber into the second and third rows of seats; it helps that the middle seats tumble and slide forward when you pull a single lever on the seatbacks. The seats in the middle row all slide independently, too, using sturdy grab-handles that are placed within easy reach – even for children.
The space offered in the rearmost seats is what sets the SEAT apart, though. If you need to regularly carry seven occupants, they’ll be most comfortable in this car; unlike its rivals, it has enough knee, head and elbow room to accommodate grown-ups in the back.
With all five rear seats folded flat, the Alhambra has the edge again. It can swallow 2,297 litres of luggage – that’s 437 litres more than the Zafira. And practicality is further boosted over the cramped and basic Vauxhall by the plastic tray tables, huge door bins and a flock-lined cubby in the top of the dash.
The SEAT feels well built, too, with a clean and classy dash plus an excellent and widely adjustable driving position. On the road, it majors on comfort and refinement. Softer suspension means it rides smoothly over bumps and potholes, and the SEAT’s 2.0 TDI engine is far quieter than the Zafira’s at idle.
That takes the stress out of long journeys – but the Alhambra is no slouch, either. Throttle response is livelier than in the Vauxhall, with the DSG auto kicking down eagerly. So while the 1,842kg SEAT weighs 157kg more than the Zafira, it was over half a second faster from 50-70mph in top, with a time of 9.6 seconds.
However, the DSG box adds £1,270 to the already high price, so cost-conscious buyers will be better off with the manual, which is also likely to return better economy than our rather average 30.6mpg. Yet our class champ still looks odds-on to retain its crown.

Chart position: 1WHY: Class-leading interior space, fantastic build and tidy handling have made the Alhambra a big player in the MPV market.