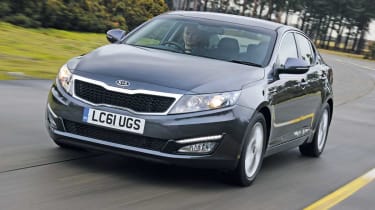 8
If the scale of the Hyundai’s task wasn’t big enough already, it also has another new arrival to contend with – the Kia Optima. The presence of this fresh-faced sibling raises the stakes even higher, and as the pair share exactly the same engine and drivetrain, they could prove difficult to separate.
Recently, Kia has tried to place a greater distance between itself and Hyundai – and judging by the popularity of the Sportage 4x4 and new Rio supermini, it’s succeeding. The Optima looks every bit as striking as the i40. They’re both handsome cars when compared with the plain Jetta, but we think the Kia trumps the Hyundai with its smart single-frame grille, angled LED lights and Jaguar-style rear end.
This is the mid-spec Optima 2 Tech, and as the name suggests it comes with a vast array of gadgets as standard. Highlights include a reversing camera which relays its image to the central display, a glass ‘shark fin’ radio antenna and Kia’s superb Infinity sound system, which features 12 separate speakers and a powerful 550w amp. But all this kit comes at a price: the £21,695 Optima costs £700 more than the mid-range i40.
The dashboard layout is easy enough to navigate and all the buttons on the centre console are robust and precise, yet it can’t match the Hyundai for quality or flair. The centre console wraps nicely around the driver, but grip the steering wheel or the gearlever and both feel cheap compared to those in the i40 or the Jetta. Dark plastics and some questionable fake wood trim mean the cabin isn’t as inviting as the i40’s, and the flimsy handbrake feels especially cheap.
The Optima has the longest wheelbase in this test, giving a massive amount of legroom in the back. Also, the driver sits lower than in the Hyundai, which in turn improves visibility and provides a more comfortable position.
On the move, the Optima and i40 are harder to separate, as they share the same 134bhp 1.7-litre diesel. They posted very similar times at the track, but drive them back-to-back on the road and the Kia clearly has the dynamic edge.
Its steering is more accurate and consistently weighted, and the gearshift action (although still stiff) is smoother than the i40’s. The trade-off is a firmer ride, and while it’s still comfortable, the Kia is slightly less refined at speed, with more wind and road noise. The stop-start-equipped Optima also trailed at the pumps, returning 42.6mpg on test, but you’ll pay £20 less a year in road tax due to the lower CO2.
Kia’s great-value pre-paid servicing pack also helps to reduce running costs. It covers three years of maintenance for £299, which is even better value than the VW’s deal.
Overall, the Kia puts in a strong showing, with bold looks, sharper dynamics than the i40 and competitive prices. Let’s see how it fares against the premium Jetta.

Chart position: 1WHY: Say hello to Kia’s take on the Hyundai i40. A driver-focused interior, stylish looks and superior kit list set it apart from its Korean cousin in this test.