Hyundai i40 vs rivals

Hyundai is gunning for the premium brands with its classy new i40 saloon. We test it against the VW Jetta, plus its Kia sister car 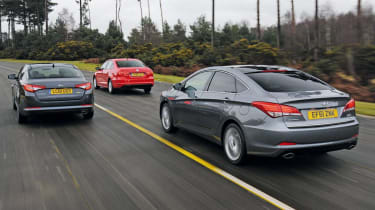 Gone are the days when saloons were stellar performers in the UK car market... but if you thought the humble four-door was dead and buried, think again.
Hyundai and Kia have introduced their latest family car challengers at the same time, so pitching the new i40 saloon against the Optima was an obvious thing for us to do. The cars share mechanical underpinnings and 1.7-litre diesel engines, so are evenly matched, but they’re not the only choices for family buyers.
The Volkswagen Jetta debuted last year, and it brings a touch of premium class to proceedings. It’s slightly smaller than the other cars here, while VW’s BlueMotion Technology ensures the Jetta is on the pace when it comes to efficiency. Unusually for a VW, our SE model is the cheapest here, but it doesn’t have much kit.
So the question is, can the Jetta seal yet another group test victory for VW? Or does the new Hyundai or Kia have enough Eastern promise to take the spoils?

The i40 saloon makes a confident debut, but it didn’t bowl us over like the Tourer version did last year. Still, all three contenders were in with a shout of victory as they entered the final straight.

More reviews for i40 Estate

The Jetta is the best car to drive by a distance, and has a depth of engineering that’s lacking in its rivals. It’s also the cheapest – albeit with far less standard kit – and cleanest car on test. But despite these strengths it’s hard to forgive the dull looks, and this nudges the VW down the pecking order.

The Hyundai finishes a close second but its dynamic shortcomings, small as they are, led us to prefer the more costly Kia. If you choose the efficient i40 Blue Drive model it’s arguably the best company car, but that’s not enough for victory.

The Optima is a compromise choice. Driven sensibly, it’s competent and comfortable, plus it’s great value, well equipped, spacious and good looking. It takes the win – but only just.

Jaguar-inspired looks, a spacious interior and solid dynamics all put the Optima ahead, but the margin of victory here is tiny. With a huge number of gadgets fitted as standard, low running costs and low CO2 emissions, the new Kia saloon is hard to resist in this company.

Make no mistake, the i40 saloon is a good car. The quality and attention to detail inside are on the money, and the less powerful Blue Drive versions produce even lower CO2 emissions. Dynamic shortcomings cost it here, but we could understand anyone who chose the i40 instead of the Kia.

With its practical interior, compact dimensions and refined driving experience, the Jetta comes close to beating the two Korean cars, yet it has to settle for third place. If you want the best driver’s car, go for the VW. But it doesn’t live up to the company’s usual high standards for interior quality and looks uninspiring inside and out.