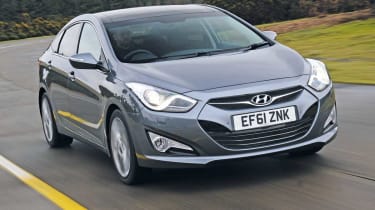 8
This is a watershed moment for Hyundai. The brand has already broken into the mainstream, but no model encapsulates its meteoric rise better than the i40. Hyundai’s last foray into the large family car class was with the woeful Sonata, but following on from the excellent i40 Tourer estate, the four-door model has now arrived to banish any lingering association with the bargain basement and challenge the class leaders.
With that in mind, the Hyundai makes a great first impression. Sporty flourishes like the subtle boot spoiler, twin exhaust pipes and standard 17-inch alloys add aggression to the i40’s smart lines. It’s a tough call between the Hyundai and Kia for styling honours, but both cars comprehensively trump the VW Jetta for kerb appeal.
The cabin is one of the i40’s best features. We’ve become used to solid and functional interiors in Hyundai’s smaller cars, but the flair and attention to detail on show in the i40 warrants special mention. The tasteful mixture of high-quality materials, simply laid-out controls and bright seven-inch touchscreen gives it a feelgood factor.
The devil is in the detail, and the i40 scores well here. For example, the graphics for the digital readouts are clear and modern, and the dash cubby containing the iPod connection has a lid, so your valuable music player can be left in the car, hidden from prying eyes, without needing to be disconnected.
Style trim includes sat-nav, cruise control and parking sensors – kit which puts the i40 close to the Kia and ahead of the VW. The car pictured is a flagship Premium model, which features leather upholstery and a panoramic sunroof. The latter combines with the high-set electrically adjustable driver’s seat to limit headroom – six footers are likely to find their hair brushing the rooflining. And even without the clever roof, the i40 isn’t perfect...
Chinks in its armour start to appear if you delve deeper. Lift the bootlid and you’re greeted with a decent 525 litres of space – the largest here by a slim margin – but the boot trim is cheap, the carpet is flimsy and the opening is narrow. The space for luggage tapers as it reaches the rear seatbacks, and while the Kia and VW both have handles in the boot for folding the seats, you have to reach into the cabin to unlock the seats in the Hyundai.
These are minor issues, but out on the road, more serious drawbacks come to light. Rivals like the Ford Mondeo and Skoda Superb have set the dynamic bar very high, and the i40 falls short of their standards. It’s also left trailing in this test by the Jetta, which put in a strong performance, with sharp body control, accurate steering and agile handling.
Our biggest gripe is with the i40’s steering: it’s vague and light at the straight-ahead and then weights up artificially as you turn. This is supposed to provide a feeling of stability on the motorway, but in practice it has the opposite effect, as the lack of consistent feedback makes it difficult to place the car accurately.
At least the forgiving suspension set-up cushions bumps well, and the i40 rides comfortably. Factor in the decent refinement and it’s clear this car is intended to feel most at home on motorways.
The Hyundai’s short gearing and 325Nm of torque provide urgent responses. This was reflected in our tests: it was 1.4 seconds quicker than the Jetta from 50-70mph in sixth, with a time of 10 seconds. It also had the best braking figures, pulling up to a halt in 56.9 metres from 70mph – 6.6 metres before the Kia. In contrast, the Optima has a more engaging feel and a slicker gearbox action than the Hyundai’s notchy shift.
Despite its performance, the i40 was also the most frugal car as it posted 49.3mpg on test – that’s more than the efficient VW. On paper it’s the heaviest polluter, with CO2 emissions of 134g/km, but its low price helps to keep costs down for business drivers.
And if you’re looking for a company car, the Style Blue Drive is the one to go for. It costs £300 more than our test car, but is equipped with stop-start, which reduces CO2 emissions to 119g/km.
So it’s economical, as well as smart, classy and comfortable. But will the new Hyundai be able to shake off its rivals and rise to the top?

Chart position: 2WHY: The i40 Tourer made an impressive debut last year – so can the saloon repeat the trick? We think it looks better than the five-door, but it faces tough opposition.