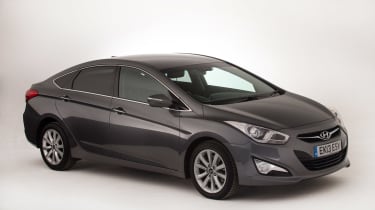 Although the i40 is a very good used buy, there’s not a lot of choice. If you don’t want a diesel that’s more focused on economy than performance, you won’t find much. Reliability can also be more of an issue than you’d expect. Even the oldest i40s are still under warranty, but that will all change over the next few months. As some owners experience a fair few problems, you need to buy a second-hand model with care. Look beyond this, however, and the big Hyundai makes a lot of sense, as all cars are well equipped and spacious, while the estate is especially practical.

Hyundai has produced some very capable models in recent years, but until the arrival of the i40 in 2011, it had never cracked the large saloon and estate classes.

The Korean company introduced one model after another, none of which could challenge rivals head on, but the i40 changed all that. At last, Hyundai offered a sharply styled family car that was well equipped, spacious, safe, frugal and with a decent ride/handling balance.

Aimed more at fleet buyers, the i40 has proven a success, and customers were encouraged by the company’s reputation for value and reliability – the latter backed up by a five-year warranty.

The Hyundai i40 is still in its first generation after first going on sale in 2011, and it’s this model that we’re looking at here.

More reviews for i40 Saloon 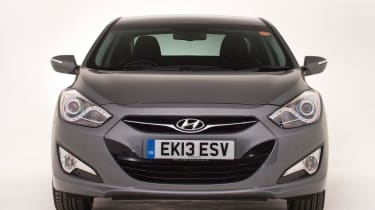 A facelift in February 2015 brought improvements for the diesel engine (now rated at 113bhp or 139bhp), as well as recalibrated suspension and extra safety kit. Plus, the automatic transmission was switched to a seven-speed dual-clutch set-up; this is far nicer to use than the earlier, conventional auto box. At the same time, trim levels were updated to S, SE Nav, SE Nav Business and Premium.

We’d opt for the most common set-up of all – a 134bhp 1.7 CRDi with a manual gearbox – as it’s the best all-rounder. There’s no such thing as a spartan i40, as even the entry-level Active comes with 16-inch alloy wheels, air-con, Bluetooth and electric windows. Also included are automatic lights and a multifunction steering wheel. 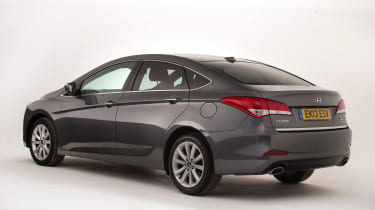 Alternatives to the Hyundai i40

The most obvious rivals are the Ford Mondeo and Vauxhall Insignia, which have broad model ranges and a choice of bodystyles.

Other competitors that focus on value for money include the Citroen C5 and Peugeot 508, plus the Kia Optima is related to the Hyundai and shares many of its traits.

The Honda Accord and Mazda 6 are also strong contenders, as they look smart and are reliable and reasonable value. They’re good to drive, too. A Volkswagen Passat will cost you more, but it’s a fine all-rounder, as are the Skoda Octavia and Toyota Avensis.

The door mirrors can occasionally play up. It’s usually because the motor has failed, and fixing things properly means replacing the whole lot. 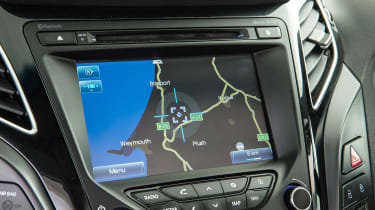 Sat-nav system can suffer from a variety of faults, including a lack of traffic information, plus the potential for a complete failure after a system update.

Steering wheel covering can peel away. Again, the only fix is to replace it, and if it’s a multifunction wheel, resolving it could be pricey.

Some examples have suffered from water leaks into the passenger side front footwell due to a break in the seal. Check the carpets for damp. 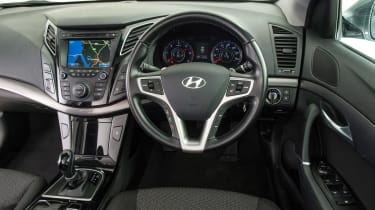 The i40 offers plenty of space front and rear and has upmarket materials in the cabin. Although the dash design is fussy, there’s a decent amount of storage and the 525-litre boot caters for most needs. The saloon’s rear seats don’t fold, but the estate offers 1,719 litres with the seats down.

Service packages are available at £499 for three years or £799 for five years, and these are transferable between owners, so it’s worth finding a second-hand example that comes with one. Because the i40’s engines are chain-driven, there are no cambelts to be replaced, which helps to cut costs further. 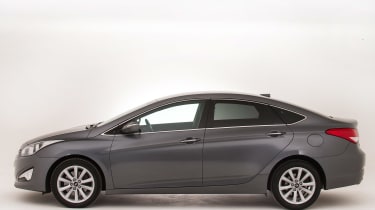 Hyundai is clearly doing something right, as since the i40 was launched, the company has only issued 11 recalls, with six of those for cars built as far back as 2002.

The other five recalls that affected cars produced after the i40’s introduction didn’t have an impact on the large family model. Instead, it was cars such as the Veloster, i30, ix35 and ix20 that were caught up in the campaigns because of potential issues with handbrakes, panoramic roofs and seatbelt pre-tensioners.