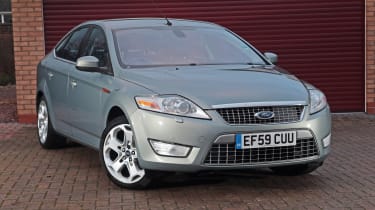 The third generation Ford Mondeo was a brilliant machine that offered a spacious cabin, excellent equipment levels, strong engines and an impressive driving experience. What it didn’t have was a premium badge, although that works in your favour when buying used because the Mondeo is an even more spectacular bargain second-hand. There are lots of baggy examples around, but some cracking cars as well – and they’re not necessarily the low-mileage ones.

Ford used to enjoy a massive slice of the large family car market, thanks to models such as the Cortina and Sierra. But that was a long time ago; by the time the original Mondeo appeared in 1993, the Germans were already starting to erode the brand’s market share. Over the past 24 years, despite the product improving, things have gone from bad to worse for Ford.

Squeezed by premium-badge alternatives along with crossovers and SUVs, the Mondeo sits in a segment that’s struggling, but don’t let that put you off buying one. As a used buy, the previous-generation version in particular is one of the best family cars going; we ran a 2.0 TDCi Mondeo Estate on the Auto Express fleet for a year and loved every moment.

The Ford Mondeo first went on sale back in 1993 and now, 24 years later, it’s in its fourth generation. The third generation was released in 2007 and was on sale for seven years before being replaced by the latest Mk4 in 2014. 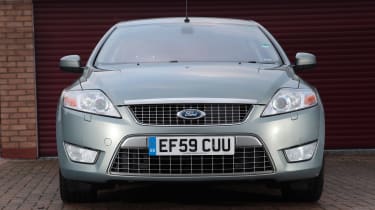 The third generation Mondeo made its debut in February 2007, with 1.6, 2.0, 2.3 or 2.5-litre petrol engines, along with 1.8 or 2.0 TDCi turbodiesels. There were four-door saloon and five-door hatchback or five-door Estate bodystyles, along with Edge, Zetec, Ghia or Titanium X specs.

A facelift in September 2010 brought a fresh nose, higher-quality interior and extra kit, plus a 1.6 EcoBoost petrol engine. The ECOnetic’s CO2 emissions were also reduced to 115g/km. More efficient engines arrived in May 2011, then the 2.0 TDCi’s engine’s emissions were cut further from April 2013.

Any of the turbocharged engines feels lively whether it’s a petrol or a diesel; the 2.0 TDCi is the most common. Saloons fetch a bit less money than hatchbacks, but they’re less practical and rarer. No Mondeo is spartan; even the entry-level Edge has air-con, Bluetooth, cruise control, electric front windows and a heated windscreen. The Zetec gets dual-zone climate control, alloys, electric rear windows and a height-adjustable driver’s seat. 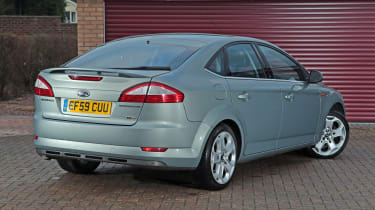 Alternatives to the Ford Mondeo

The Vauxhall Insignia provides top value, comes in hatchback or estate forms, and there are masses available. Equipment, practicality and reliability are on par with the Mondeo, but it’s not as good to drive.

Other top-value alternatives include the Peugeot 508 and Citroen C5, but we’d be more inclined to opt instead for a Skoda Octavia, thanks to its strong reliability and wide availability; prices are surprisingly high, though. Another stylish alternative to the Ford that’s available with some excellent engines is the Mazda 6.

Bridging the gap between mainstream and premium is the Volkswagen Passat, which also comes with strong engines and technology. Just bear in mind that you’ll pay more than for an equivalent Mondeo.

A lot of owners have had problems getting their DAB radios to work. Sometimes a software update fixes things, but don’t count on it. 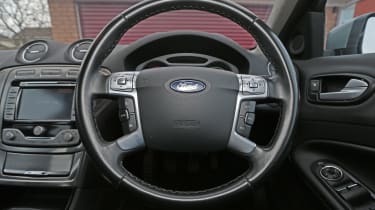 Make sure that the steering feels light and is quiet; if it’s heavy or makes whining noises as the wheel is turned, the rack may have failed.

The contacts for the cruise control switch can play up, leading to the system failing. Some switch cleaner should fix things.

The condenser for the air-con can fail prematurely on early cars; many of them have been replaced under warranty by now, but check it anyway.

The spacious cabin is a Mondeo strong point, with loads of room for four or five occupants as long as they’re not too big. Refinement is excellent thanks to the comfortable seats and plush ride, while quality is good and the dashboard is intuitive to use. The hatchback has a massive 528-litre boot; fold the seats and this jumps to 1,448 litres. The Estate can stow up to 1,733 litres with the rear seats folded. 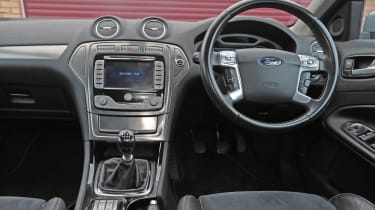 All third-generation Mondeos need to be serviced every 12,500 miles or 12 months. Services alternate between minor and major; for cars under four years old these are priced at £140-£205 and £175-£280 respectively. Once a car reaches its fourth birthday dealers offer fixed-price maintenance at £125 for a minor service, and £195 for a major check-up.

There have been four recalls for the third-generation Mondeo. The first was in April 2009 because of a fault with the anti-lock brakes. Then, in May 2009, the second recall affected Mondeo 2.0 TDCis, which could suffer from the braking system losing its power assistance when cold. 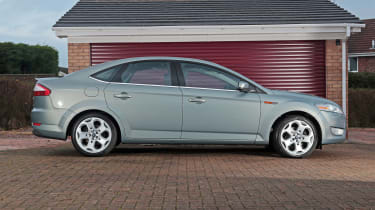 The third campaign came in May 2011 because the headlights and indicators could suffer software errors, then in September 2013 it became apparent there was an issue with fuel leaks from the injection system.

It shouldn’t be too surprising that the Mondeo managed just 129th place in our Driver Power 2016 satisfaction survey; it is a decade old. Owners love the practicality (it came 29th) and 74th for handling wasn’t bad. In-car tech was rated 103rd and performance 99th.