Is the petrol-electric Ford Mondeo Hybrid Estate the best buy in the refreshed family car range? 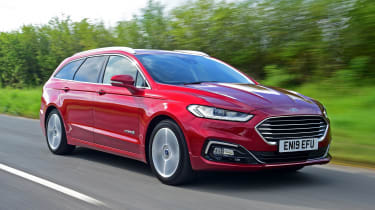 The Ford Mondeo Hybrid Estate offers company car users tempting BiK rates, but there’s really not much else to recommend it. It feels too slow, too coarse and too compromised. If you need the space of an estate and the benefits of a hybrid powertrain, get the new Toyota Corolla Touring Sports instead; not only is it slightly faster, it also has a bigger boot and is more economical in the real world. Above all, it’s cheaper to buy, too.

Anyone remember the Ford Mondeo? Back in 1995, it was the UK’s third best-selling car, with over 118,000 shifted. Then demand for SUVs exploded, and the Mondeo (and its rivals) fell dramatically from favour.

But even now some fleet users still hanker after a comfortable large family car that can cover huge motorway miles, so the current Mondeo has been freshened up for 2019.

The revamp includes a new front bumper, a different grille for each trim and a metallic strip through revised tail-lights. There are new colours and wheels, too, and Ford says the cabin is finished to a higher standard. 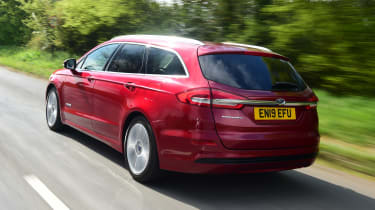 The hybrid HEV model – formerly only offered as a saloon – is also now available as an estate. So this is our first encounter with not only the refreshed Mondeo, but also the hybrid in its new body style.

In terms of hardware, the hybrid system is pretty much the same as before. That means a 2.0-litre Atkinson-cycle petrol engine is boosted by an electric motor fed from a 1.4kWh lithium-ion battery. However, Ford says it has tweaked the software to make the system operate more smoothly than before – and it seems to have worked.

While the previous version suffered from a grabby brake pedal, the new car is easy to drive smoothly. The switch between petrol and electric is, for the most part, hard to notice; it’s common for the engine to cut out when coasting, even at motorway speeds. 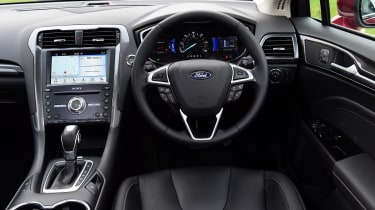 As before, though, that’s about the most positive thing we can say about this set-up. Pottering about at low speeds is fine, but ask for any sort of power and it all goes wrong. The first inch or two of throttle travel offers little acceleration, so you press harder and harder until you’re punished by an exasperated huff from the four-cylinder unit. And still very little acceleration.

This is a shame, because the Mondeo is still reasonably capable through bends. The HEV turns in nicely, remains composed and has a fairly comfortable ride. Road noise is a weak point but otherwise it’s a fine cruiser.

From the outside, the only clue to the petrol-electric tech is the obnoxiously large ‘Hybrid’ lettering on the front doors. Inside, other facelifted Mondeo autos use the neat rotary gear selector from the new Focus, but this hybrid carries on with the regular lever.

A pair of 4.2-inch digital displays flank the speedometer. The screen on the right even congratulates you for your choice by saying, “Thanks for driving a hybrid!” when you park.

Covering a wide mix of roads, our Hybrid averaged mpg in the mid-forties. That’s far better than a conventional petrol Mondeo would achieve in similar conditions. But in its natural habitat on the motorway, the diesel equivalent will use less fuel. 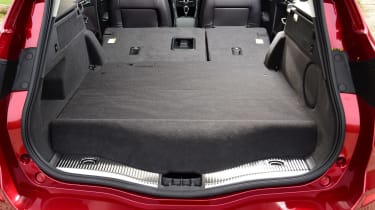 Still, the HEV’s CO2 emissions are the lowest in the Mondeo range, and it’s worth noting that on 17-inch wheels, the output is rated 10g/km lower than the 113g/km of our test car, with its 18-inch rims.

However, the Corolla Touring Sports 2.0 hybrid costs from £28,820. Its infotainment system isn’t a match for the Ford’s, but it’s faster, more frugal and has a larger boot.