The Ford Mondeo is now available in ST-Line trim, but does the added kit make the popular family car more appealing? 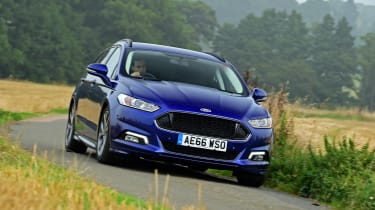 It’s by no means our favourite family car, but if the Ford Mondeo takes your fancy, this ST-Line model is preferable to the flash and blingy Vignale spec. It looks smart, has most of the kit you’ll need and is a bit more composed to drive thanks to the standard-fit sports suspension. It’s also spacious, comfortable and refined – but a Skoda Superb estate is even more practical, nicer to drive and better value, too.

The mere mention of the term 'ST' next to 'Mondeo' will be enough to make fast Ford enthusiasts sit up and take notice. But they shouldn’t get too excited; ‘ST-Line’ is a slightly sportier trim level, rather than a long-awaited return of the Blue Oval’s hot family car. We’re driving it to see if it promises any more than it can deliver.

The first disappointment for those expecting a more sporting Mondeo is that ST-Line models get no mechanical upgrades. The US market Mondeo (called Fusion) can now be ordered with a thumping great 322bhp twin-turbo V6, but there’s little chance of that engine coming here. 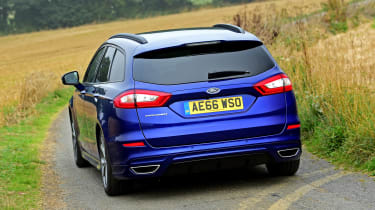 Bar suspension that’s been lowered by 10mm, the ST-Line chassis and powertrains are identical to those found in the rest of the range. Instead, it’s Ford’s answer to Audi’s ‘S Line’ and BMW’s ‘M Sport’ trims, offering a sportier look but without the extra running costs of a bigger engine.

To that end, the Mondeo ST-Line receives smart 18 or 19-inch alloy wheels (our car has the former) a chunky bodykit, a rear spoiler, honeycomb grille and contrasting trim and badging. There’s also some red seat stitching, aluminium pedals and a dark roof headliner to lift the cabin. Inside and out, we think it looks smarter and sportier than lesser Mondeos, and is far more visually successful than the blinged-up Vignale.

Standard kit is pretty extensive, too: ST-Line sits above Titanium spec, so you get dual-zone climate control, auto lights and wipers, traffic sign recognition and the new and improved SYNC 3 touchscreen infotainment system with sat-nav and DAB.

Ford reckons ST-Line will become its most popular trim level after Titanium, and we can see why. Our mid-spec diesel model might look a bit steep at £27,345, but Ford assures us that finance deals will be more competitive. Some cheap materials on the centre console do give away the Mondeo’s more humble roots, however. 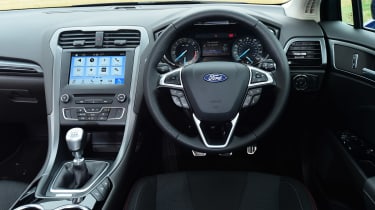 ST-Line models offer up another benefit with the slightly lowered sports suspension. We’ve criticised the standard Mondeo for erring too far on the side of comfort and lacking the agility that older models are famous for, but this one felt a little more composed in the bends. It’s still no Mazda 6 thanks to the light, vague steering and sheer size, but it’s an improvement that doesn’t harm the big Ford’s excellent comfort. There’s the odd audible thump from the suspension at low speed, but it’s a cossetting motorway car that keeps wind and road roar at bay.

The beauty of the ST-Line Mondeo, therefore, is that you get a car that doesn’t demand any compromise despite the added desirability. The 2.0-litre diesel engine in our test car is not fast by any means, but it’s smooth enough with plenty of mid-range grunt for overtaking. Decent efficiency figures mean it won’t break the bank, either. It’s a shame, though, that those after a bit more performance can’t opt for the most powerful (but auto-only) engines in this spec.