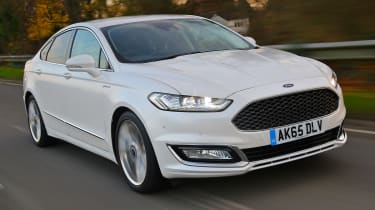 Think about the Ford Mondeo Vignale as a quieter, more comfortable and better-equipped version of the standard car and it makes more sense than it being a rival for the BMW 3 Series or Mercedes C-Class. It's a shame the new Mondeo isn't as good to drive as it used to be, but that won't matter to many Vignale buyers, who will be more impressed by the upmarket leather interior and low running costs.

Ford is facing a tough challenge with this new Mondeo Vignale. It’s priced to compete against competition from BMW, Mercedes and Jaguar, yet the transformation from mainstream Mondeo into executive saloon isn’t wholly convincing.

Rather than creating a direct competitor to the 3 Series and C-Class, Ford says the Vignale has been designed to allow existing customers to get a little bit more from the Mondeo. Bosses told us that a large number of owners already choose top-spec models, and this car is a further step up, with more kit, attention to detail and exclusivity. Ford also pointed out that it’s not expecting huge sales from the Vignale. Instead, it hopes to retain customers who may be looking for something more luxurious from the brand.

The range starts at £29,345, and is available with two diesel engines, an EcoBoost petrol or a petrol-electric hybrid. There’s a choice of gearboxes, too, with a six-speed manual or Powershift auto available on petrol and diesel cars. The Hybrid model gets a CVT gearbox. 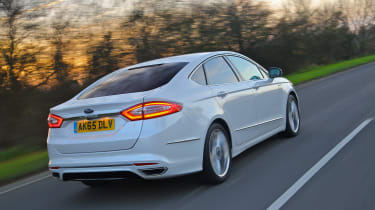 We tested the most powerful 207bhp diesel auto. The engine delivers 450Nm of torque, so it’s a strong performer – but you’re unlikely to notice the extra 50Nm it has over the 178bhp model, as both are easy to drive and feel powerful enough. The lower-powered model will be cheaper to run, too, with 68.9mpg economy trumping the 207bhp version’s 58.9mpg figure.

We were disappointed by the softer, more comfort-focused handling of the new Mondeo when it arrived, and although the Vignale has the same light steering and hefty kerbweight that detracts from the car’s enthusiast appeal, it does start to make more sense in this context. Most owners will be using the car for cruising along the motorway to work every day, and thanks to active noise cancelling and more soundproofing, the Vignale treatment is a good character fit for the Mondeo. Keener drivers, however, will still look to the 3 Series.

The interior is undeniably upmarket, with high-quality leather dashboard, door panels and steering wheel ensuring that everything you touch feels classy. There’s loads of standard equipment, too, such as sat-nav, a rear-view camera, heated front seats and parking sensors front and rear. 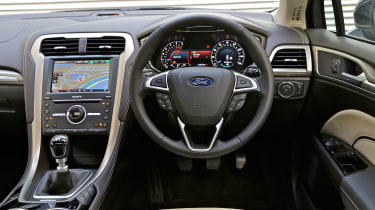 It’s often the small things you notice most about a cabin, though, and it’s here where the Ford could lose ground on its German rivals. The hard plastics on the glovebox and centre console remind you that you’re in a Mondeo, and the fact that you don’t get an electronic passenger seat in a £31,000 saloon is a bit stingy.

The seats themselves are plush and supportive, but they aren’t as comfortable as those in a Mercedes C-Class. There’s not much headroom for taller rear seat passengers, either – especially with the optional sunroof fitted – but otherwise the Mondeo feels spacious inside.

Perhaps surprisingly, the Vignale isn’t available as a hatchback. In an effort to boost its appeal to executive buyers, Ford only offers it as a saloon or a more practical Estate. The former boasts a 525-litre boot, which is bigger than the Audi A4 and 3 Series’ capacities (both 480 litres); go for the Estate version, and you can fold down the rear seats to free up 1,630 litres of space. 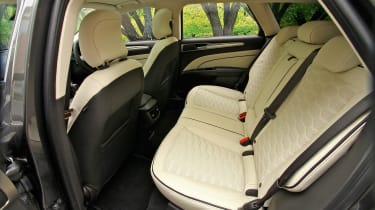 While the Mondeo Vignale may not be Ford’s answer to Mercedes or BMW’s premium saloons, it’s difficult not to draw comparisons at this price point.

However, it does have plenty going for it – Ford’s competitive servicing costs, personalised dealer service and low company car tax mean it’s worth a look for those who want a quiet and refined commuter car yet don’t want to follow the crowd.