Final report: 'Global' family car feels like it's best suited to US roads 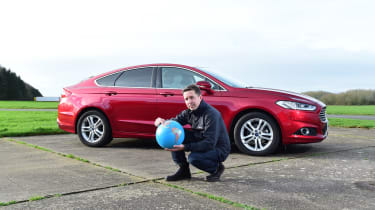 There have been a few too many niggles with the Mondeo for it to have made a big impact on any user at Auto Express. The motorway ride is comfortable and the infotainment system is easy to use, but the poor steering on our car and lack of driving involvement mean it’s not a patch on the model it replaced.

When the ‘One Ford’ strategy was announced back in 2010, it seemed like a good idea. The brand’s aim was to cut costs and streamline manufacturing by building cars that were suitable for a global audience.

However, whenever I get behind the wheel of the Mondeo we’re running on our fleet, it seems like its vision is focused on Ford’s homeland: the US.

The latest Mondeo was one of the first cars launched as part of this worldwide strategy, and given the success of previous models – as well as this car’s long gestation period – you would expect it to do well. 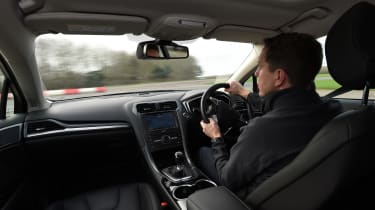 And it’s a good start from the outside, because even though the car is pretty big, it does at least look smart. The latest model is longer than its predecessor, but it’s actually marginally narrower and still looks massive when compared to rivals such as the VW Passat and Mazda 6. Personally, I like the exterior design, although the wheels do appear a little bit lost in the arches, and a set of fatter alloys would complete a fairly handsome car.

So the Mondeo looks to America for its design and dimensions, and unfortunately that’s where it gets its driving manners, too. I’ve been behind the wheel of lots of previous-generation Mondeos, and they were great. They proved that big family cars can be great fun on twisting roads, but the new model lacks flair. It could be the extra weight, but the front end bounces over most surfaces and the steering wheel shakes in your hands as you go over bumps of any size. Even so, there’s no real feedback.

Our car is also suffering from a rather tedious knocking sound from the steering column as you turn from lock to lock. We’re  going to get this checked at the same time as the electric tailgate, which opens fine but won’t close automatically. 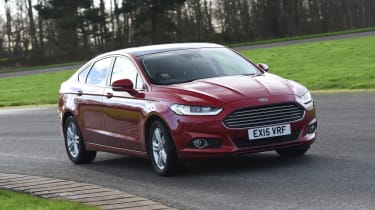 Another niggle with the Ford is based around family use. My daughters are old enough to buckle themselves up, but the car’s airbag seatbelts are tricky to clip in. The lap belt section is hard to get over their booster seats, and you need to line the buckle up perfectly straight with the latch to clip it in.

On the plus side, the entertainment system works well, providing accurate and up-to-date information on traffic, while the floaty ride makes the Mondeo a great motorway cruiser. Maybe Ford felt that the sacrifice in driving fun was worth it to keep long-distance motorway users happy. If you can live with the bouncy ride, then this car could still be all the family car you need. 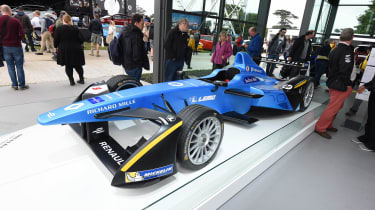 A few years ago, bosses from Ford told me it should be considered a tech company. They weren’t wrong, if our Mondeo is anything to go by – it’s littered with gadgets and gizmos, to the extent I’ve had to do some serious swotting up to ensure I know how they all work.

They don’t come cheap, either, with the array of extras on our car hiking the price by a not inconsiderable £7,045. Plus, at times they create the effect that you’re sitting in the middle of a pinball machine, with lights and alerts whizzing on and off at will.

But which of this tech do you actually need – and what’s an unnecessary extravagance? Well, the £2,000 Titanium X Pack isn’t cheap, but with heated leather front seats, keyless entry and privacy glass, it’s nice to have. 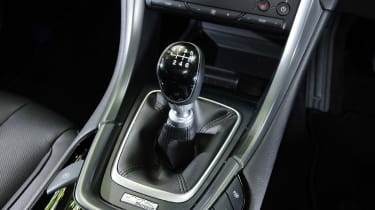 The clincher, though, is the inclusion of Dynamic LED Headlamps. These select an appropriate beam depending on conditions, while their dynamic cornering function lets you see round bends better. Having been shocked at how poor the illumination was from the halogen units on an austerity-spec hire car I had in Spain over the summer, I can’t imagine doing without the Ford’s lights.

As I’ve mentioned before, the Mondeo’s a big car and not the easiest to park – you never have a great sense of where its outer reaches are. So the £250 Rear View Camera and £450 Active Park Assist are interesting propositions. Personally, I’d take the former over the latter.

The resolution of the colour screen is pretty good, ensuring the images from the camera, combined with on-screen guides, will keep you safe. The self-parking, though, is surely only for those with no confidence over low-speed manoeuvres. Yes, its ability to find spaces just 20 per cent longer than the car is impressive, but once the novelty had worn off, I found I’d rather park myself. 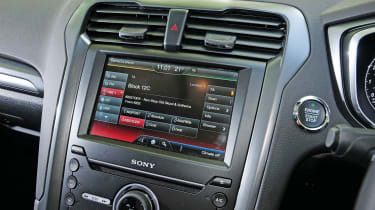 Other safety features include Blind Spot Monitoring (£500), which flashes a light in the wing mirror if a car is poised to overtake. It’s massively useful. Yet while Active City Stop – which sounds an alert and can apply the brakes if it senses an imminent collision – is a brilliant idea, it’s too trigger happy.

The infotainment is generally proving its worth. I’ve had no quibbles with the routing on the £450 Sony DAB Touchscreen Navigation, but I’ve found it unwilling to accept some postcodes. Still, the system comes with 12 speakers for the audio, and it sounds excellent. Ford’s SYNC 2 system ensures phone pairing and voice control for making calls is really simple, too.

And the Mondeo overall? Great on motorways, but less convincing elsewhere would be the verdict. In some respects, it’s as if the tech is better executed than the car itself.

Big hatch proves a mixed bag on trip to Scotland 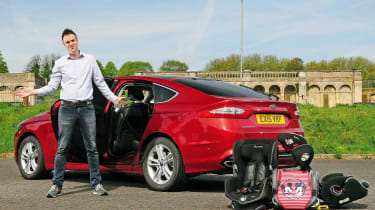 A game of two halves. In football parlance, that would be the perfect description for our Mondeo’s performance on a recent marathon 1,200-mile trip north of the border when I visited Police Scotland in Stirling for our feature on the new, lower drink-drive limit.

On the motorway, the big Ford was in its element. Eating up mile after mile with ease is its forte, and contrary to our road testers’ assertion in our estate group test that getting comfortable behind the wheel is difficult, I had no complaints whatsoever – not always the case when you’re a six footer, as I am.

A healthy suite of in-car entertainment ensured I was never bored, either, with the on-screen menu easy to navigate as I flicked between stations on the standard DAB radio. 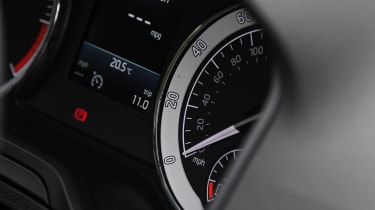 But the Mondeo was less at home on the twisting back roads that lead to Doune Castle near Stirling, a magnificent medieval construction that has starred on screen in Monty Python’s The Meaning of Life and more recently, as Winterfell in Game of Thrones.

Where the Mondeo’s predecessor would have attacked these scenic B-roads with relish, the new model simply couldn’t and didn’t. At times it felt like trying to steer an ocean liner down some white water rapids – the vast Mondeo feels too cumbersome and disengaged to derive much enjoyment.

There are problems at lower speeds, too. Back in London, I have to negotiate a poorly maintained rubble track as part of my daily commute, and the suspension simply can’t cope. Each minor bump or hollow sees the car sway from side to side unfailingly.

Of course, a long trip like my Scottish adventure also highlights if there are any niggles with a car – and the Mondeo threw up one or two. Chief among these is the driver fatigue alert, which sounds an audible and visual alert if you change lane in a manner that causes the system to think you are tired. 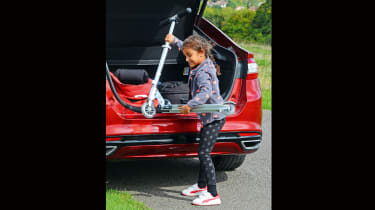 Well intentioned it may be, but clearly it didn’t rate my style of driving as it constantly beeped and flashed in front of me as I changed lane. 100 miles in and I was certainly tired – tired of the intrusive system disrupting my drive, that is.

And while the panoramic roof makes the cabin feel wonderfully airy, it also means so much light streams in that the touchscreen displays every single greasy fingermark. It’s horribly unsightly.

I’m a bit disappointed with some of the build quality, too. The parcel shelf, for example, is already broken – poor on a car of this price.

So it’s been a bit of a mixed bag for the Mondeo, although one constant has been the number of compliments and admiring glances our Ruby Red model has attracted. Having the prettiest of faces makes it easy to overlook one or two disappointments.

And so I’ve become that most celebrated of nineties cultural icons, Mondeo Man. For those too young to remember, Mondeo Man was the aspirational everyman who was targeted for votes by the political parties at the 1997 General Election.

The Mondeo of those days was the kind of car he might feasibly have owned. Fast forward 18 years, and I’d wager Mondeo Man might be slightly surprised at how significantly his car has changed. Because Ford has gone hi-tech, and a bit posh, too.

The Mondeo that has just joined our fleet is a very plush bit of kit with genuine upmarket appeal, especially in our attractive Ruby Red special metallic paint (a £795).Mondeo Man might baulk at the price, too. A host of cutting-edge extras has hiked the cost up from £24,545 to a weighty £31,685. 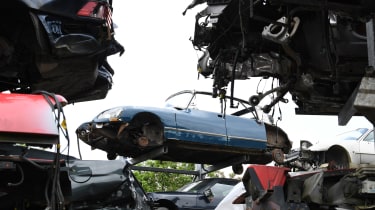 It’s all very desirable. But there’s one extra that’s got my time with the Mondeo off to a false start. The inflatable seatbelts fitted to the rear of the car are a very clever idea that improve safety by spreading the impact of a crash over five times more body area than normal belts.

They’re more comfortable to wear, too, due to the soft edges. But parents of young children need to make sure they read the small print before ordering – as they are not compatible with belt-fitted non-Isofix seats for the very young.

The Mondeo brochure only highlights their compatibility with booster seats – rather than non-compatibility with others – so you’ll need to rely on dealers knowing their stuff if you order one in the showroom. Ordering online makes it clearer, but it’s still possible to miss the disclaimer. And I’d wager there will be plenty of people who buy and run this car for a while before falling pregnant who’ll be caught out by this anomaly. 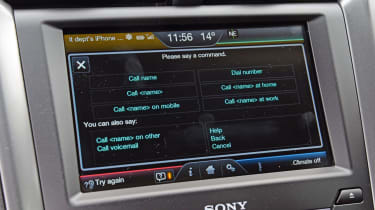 While my five-year-old daughter Isla’s Isofix booster is easily attached, the car seat I’ve been using for my two-and-a-half-year-old Erin – the swivelling MaxiCosi Axiss – isn’t compatible, so that’s rather curtailed my time in the Mondeo so far. And alternatives – well, Isofix, front-facing, swivelling ones – are thin on the ground. However, the good news is I now have a £400 Cybex Sirona on order that should fit the bill.

When I have managed to get behind the wheel, the overriding impression is just how vast the Ford is. Not only has Mondeo Man grown up, but the car has, too. The drive is more mature than before – where once a Mondeo relished being hustled along a back road, it’s now more at ease on the motorway. 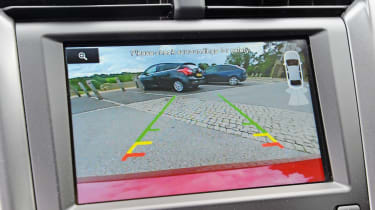 The 178bhp 2.0-litre TDCi engine provides adequate, if not startling, punch, while remaining impressively hushed, and Ford promises fuel economy in the region of 64.2mpg is achievable. We’ll be keeping an eye on how close we get to that.

The feeling of vastness is exemplified by the boot, which at 541 litres – or 1,437 with the seats down – will be able to cope with all I could reasonably expect to carry. All in all, the Mondeo is shaping up to be a fine family car for the Hopes – once our new child seat arrives, of course, and I can actually take the tiniest member of the family with us…