The all-new Hyundai Sonata previews the brand's new platform technology, but it's not coming to Europe 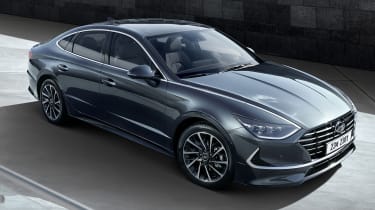 We can’t imagine there’ll be angry mobs banging on the doors of Hyundai dealers demanding they bring this new Sonata to the UK; it’s a wise move by Hyundai UK not to bother. The poor ride quality and some disappointing materials inside really let the side down, although the excellent and innovative tech – for the sector, at least – brings the score back up. Let’s hope this car isn’t a sign of things of come from other models on this important new platform

It’s a strange way to start a new product presentation of a new medium-sized family car by showing a graph revealing fast tumbling sales in the segment. But it’s still a sizeable enough number to convince Hyundai it should replace its Sonata with an eighth-generation model later this year.

However, it’s not enough to persuade Hyundai to bring the car to the UK – or even the rest of Europe (not even wearing an i40 badge, which dies after the current car) – even though it’s bound to the US, China and other important markets.

More reviews for i40 Saloon

What is relevant to UK Hyundai (and Kia) buyers is that the new N3 platform that the Sonata makes use of is architecture that will roll out to other mid-sized models wearing the brands’ badges, including their SUVs.

The Sonata also debuts Hyundai’s latest suite of smart technologies, too, which is why we took advantage of a test drive on a specially arranged World Car of the Year judging session. The car we drove was a Chinese-spec Sonata in 2.0-litre petrol guise.

New and more exciting 1.6T and 2.5 GDI Smartstream engines will also be available with 178bhp and 189bhp respectively, so the less said about the wheezy 2.0-litre, with its disproportionate engine noise-to-performance ratio, the better.

More worrying for future products is the dreadful ride quality of this early car – it’s a while since we’ve driven a new car that rode over all sorts of bumps so badly. Whether they were gentle road ripples, potholes, slightly raised drain covers or larger undulations, the Sonata would crash over the lot, constantly reminding you of the chassis’ shortcomings. Let’s hope this is a particular setting for this particular car – but it wasn’t the greatest introduction to this new tech. 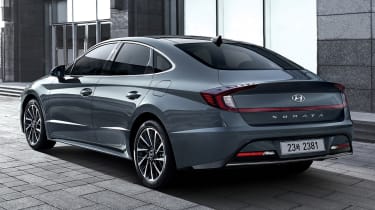 On the plus side, grip levels are pretty good if you do decide to up the pace through corners, although the steering feels as artificial as the leather that wraps the wheel.

At least Hyundai is honest that the ‘hide’ across the dash is man-made, but the plastic used for the instrument cowl, inside the door pulls and on the centre tunnel were disappointing. The company has shown massive improvements on interior quality recently, but the Sonata is clearly built down to a price. Again, this was perhaps a reflection on its Chinese specification.

Some of the switchgear placement was odd, too. You expect the electric parking brake control to be placed near the push-button gear selector, especially as the auto-hold braking switch was there. But no, after a hunt around it’s found hiding behind the steering wheel alongside the remote boot opener.

All that’s a bit of a shame because the car looks good with its new ‘Sensuous Sportiness’ design language. It takes themes from the Le Fil Rouge four-door coupe concept shown at 2018’s Geneva Motor Show, continuing that car’s silhouette, which does nothing for interior headroom, with a sharp kick up at the back.

The highlight is a single chrome strip that runs from the wing mirror all the way back around the side windows and down the bonnet, where it meets with the LED daytime running lights. The full-width light strip along the back looks good, too, unlike the small aerodynamic fins on top of the rear lights, which look more like an aero fix than a design feature. 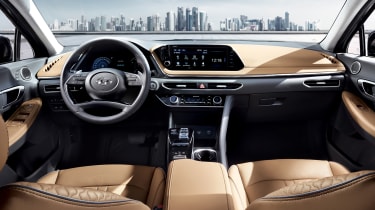 Where the Sonata also excels is on the tech, which is just as well as Hyundai refers to it as a Smart Mobility Device. You can unlock the doors via your NFC (Near Field Communication)-equipped smartphone, which you then place on the wireless charging mat to start the car. You can give friends and family access via their devices, as well, while you can open the boot remotely for your local friendly parcel drop-off person, too. If you do have the key fob, you can use it to start the car and pull it out of a tight parking space – or reverse it in if you don’t think you can park up and get out yourself.

Then there’s a full roster of Hyundai Smart Sense features, such as adaptive cruise control that can keep you in your lane, all sorts of monitoring systems to keep an eye on people and other cars around you, and a 12.3-inch instrument cluster and 10.25-inch infotainment touchscreen with smartphone connectivity.