Toyota Avensis vs Hyundai i40

Can revised Toyota Avensis see off Hyundai and take a bigger slice of fleet sales? 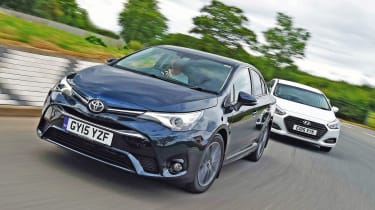 The lure of upmarket compact executive models has meant that sales of big family saloons have been in freefall for the past few years.

Even so, mainstream manufacturers have refused to give up on the ailing sector, with new and revised models hitting showrooms nearly every month. 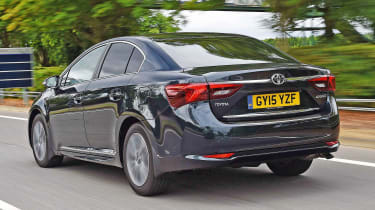 The latest arrival is the Toyota Avensis, which has been treated to a much needed nip and tuck after more than five years on sale. Featuring a sleek new look and upgraded interior, the newcomer has premium models in its sights.

Crucially, with a line-up of efficient new engines and well equipped Business Edition versions, the Toyota is aiming to take a significant slice of the action in the fiercely competitive fleet sector that makes up around 70 per cent of sales for these types of cars. 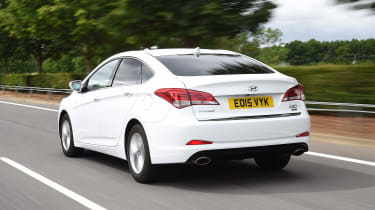 Yet the Avensis isn’t the only family model that’s been under the knife, because Hyundai has also treated its i40 to a mid-life refresh.

The changes aren’t as marked as the Toyota’s, but tweaked engines, retuned suspension and a revised trim line-up aim to ensure the great-value Hyundai is an even more attractive choice.

So which of our newcomers makes more sense for both company car users and private buyers?

Click the links above to read individual reviews, and scroll down to see which sensible saloon comes out on top...

In the UK, company cars account for over 70 per cent of sales in the large family car class. So it’s no surprise that our contenders in this test are aimed at business users looking to keep Benefit in Kind tax costs in check. 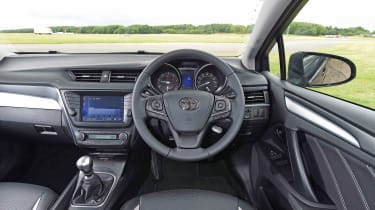 With its Business Edition Avensis, Toyota makes no bones about its target customers. Not only does this model offer the sort of kit high-mileage drivers demand – sat-nav and cruise control are standard – its new 2.0-litre diesel has been tuned to deliver low 119g/km emissions. Add an attractive £22,995 price tag, and higher-rate earners will face an annual tax bill of £1,927. 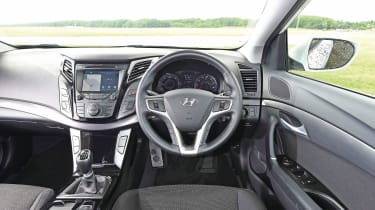 Hyundai is equally keen to tempt business buyers, lowering emissions and increasing the kit count on its new i40 SE Nav.

The 1.7-litre CRDi comes in two states of tune: the 139bhp version tested here and a lower-powered 113bhp version. The latter emits 4g/km less CO2 than our car, at 110g/km.

As with the Toyota, buyers can upgrade. SE Nav Business spec adds extras like leather-trimmed and ventilated seats, and is offered with both engines. 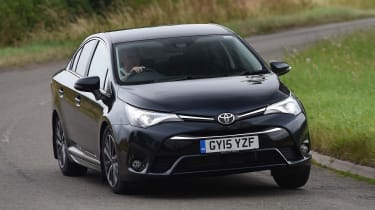 The revised Avensis is a car transformed. It’s more distinctive than its bland predecessor, is well finished inside and surprisingly good to drive. It’s not as roomy as the i40, and we’d expect lower emissions from a model targeting fleet sales, but it’s a great comeback from Toyota. Strong refinement and decent fuel economy add further appeal, while the extra safety kit is the icing on the cake. 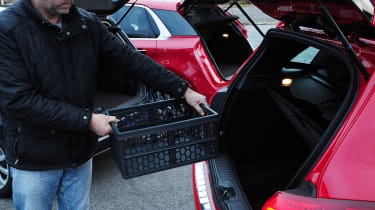 There’s little separating these cars, but the i40’s slight performance advantage and impressive warranty can’t overcome its lack of key fleet features like adaptive cruise and emergency braking. Decent fuel economy, strong practicality and great handling still make it a fine all-rounder for business users and private owners alike, but it doesn’t look or feel as upmarket as the Toyota, either.

The latest Mondeo isn’t as good to drive as it once was, but it’s still a very practical choice, plus in 2.0 TDCi ECOnetic Zetec guise it emits just 107g/km of CO2. Yet you’ll have to fork out an extra £300 on sat-nav and £200 for Active City Stop. 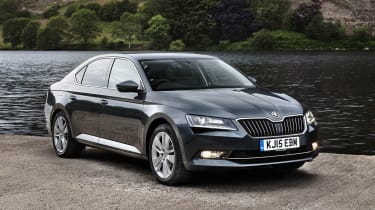 If you want a spacious, handsome, refined, good to drive and upmarket company car, it’s hard to look past the Superb. The diesel is punchy, frugal and attracts low tax bills, while SE Business trim offers all the kit you’re likely to need.