Can a fresh look, cleaner engine and suspension tweaks make the family car a contender? 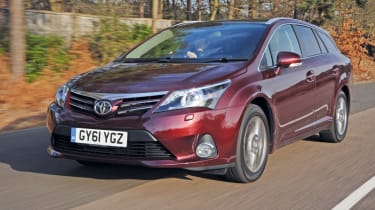 As a family car and a company car, the Avensis Tourer has lots going for it. Road tax is free for the first year, fuel bills are low and the comfortable ride and refined engine make it perfect for long journeys. But this car won’t appeal to enthusiasts. While a quicker steering rack and stiffer anti-roll bar have done their bit to sharpen things up, work still needs to be done to involve the driver.

Advertisement - Article continues below
Modern family estates have to do it all – sporty handling and stylish looks are as important as practicality, value for money and efficiency these days. So does the facelifted Avensis Tourer tick all the boxes?
Style has never been the Toyota’s strong point, but the exterior has been refreshed with a sleeker grille and reshaped headlights that give the car a lower and wider appearance. Look closely at the rear and
you’ll see the tail-lights have been subtly tweaked, too.
Inside, Toyota has also simplified the centre console, while a leather-trimmed steering wheel comes as standard and the dashboard is now finished in a better-quality soft-touch plastic.
Advertisement
Advertisement - Article continues below

Not only does it look and feel much classier than it did before, but the Tourer also drives better. Extra sound-deadening keeps wind, road and engine noise at bay, while tweaks to the suspension have ensured the ride remains as comfortable as ever. Improvements could still be made to the way the Avensis tackles smaller road imperfections, though; potholes aren’t soaked up as well as they should be.
Advertisement - Article continues below
We tested the best-selling 2.0-litre D-4D diesel, which has been uprated to be quieter, smoother and – most importantly – more efficient. Fuel economy increases to 61.4mpg, while CO2 emissions of 119g/km are now low enough to rival class leaders.
The engine delivers the same 126bhp of power, so the 10-second 0-62mph time is unchanged. But the car is noticeably more refined; only when you explore the upper limits of the rev range does it sound harsh. The Avensis is most at home on motorways, where the engine settles down to a barely audible hum.
In an effort to spice up the handling, Toyota has fitted a stiffer anti-roll bar, plus the steering is now quicker than before. On twisty roads the Tourer feels more agile than it used to. The problem is that all the controls – the steering in particular – are a bit lifeless. There’s quite a lot of grip and very little body roll, but simply no driver involvement.
Still, this has always been a criticism of the Avensis and it hasn’t stopped it selling really well. This is a relaxing rather than entertaining car to drive, while the Tourer model is as practical as ever. There’s lots of room in the rear, and when you fold the seats, the 543-litre boot expands to a huge 1,609 litres – although a Ford Mondeo Estate is even bigger.
Our T-Spirit Tourer tops the range and comes with full leather upholstery, a reversing camera, climate control and sat-nav. But as it weighs in at £26,825, we’d recommend you go for one of the cheaper – but still generously equipped – lesser models.
Advertisement
Share this on TwitterShare this on FacebookEmail
Advertisement