The Avensis scores on value and is easy to own. But are there any pitfalls? 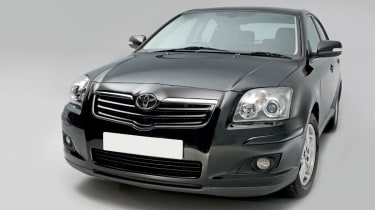 It’s no wonder there are so many Avensis taxis; if they’re cared for, they keep going for a long time. The car isn’t very glamorous, but that means values are low; just £4,000 buys a model that’s easy to live with, easy to drive, comfortable and frugal. Add decent refinement, strong engines and secure handling, and this Toyota is one of the most accomplished family cars there is for the money.

If you want a large family car that’s easy to live with and affordable to buy, the Toyota Avensis Mk2 is for you.

You won’t be excited by its styling and the driving experience isn’t that much fun. However, it handles safely, there’s plenty of space for the family and – as with most Toyotas – it’s generally as reliable as a Swiss watch.

Throw in a choice of saloon, hatchback or estate bodystyles, plus an array of highly efficient engines, and the Avensis serves up great family transport.

A few months later, in July 2006, a facelift brought a new nose and tail-lights, more kit, revised suspension and steering, plus a more powerful and more efficient 2.0 D-4D diesel engine.

The Vauxhall Vectra and Ford Mondeo are brilliant value, as supply is plentiful, and there’s an array of engines, bodystyles and trims, plus they’re cheap to run.

There are also lots of Peugeot 407s, Citroen C5s and Renault Lagunas around, all at tempting prices, and these cars are also comfortable and well equipped, but not always as reliable.

The Nissan Primera offers amazing value, space and reliability, plus lots of kit. So does the Honda Accord, but you’ll pay more. Also consider the VW Passat, which is really solidly built, roomy and comes with some great engines.